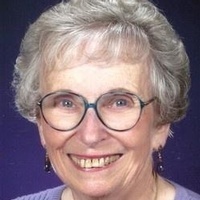 Lib was born at her grandparent’s home in Palestine, Texas around midnight July 20, 1924. She was the first child of Patrick Russell and Katherine O'Connell Russell. Her beloved sister Margaret was born 15 months after Lib. The family lived briefly in Port Arthur, Texas and the rest of the years through college in Beaumont, Texas. Though she grew up during the depression years, she had a happy life with her sister Margie as one of two very cherished children of Pat and Katie Russell.

Even as a little girl, Lib was known for her friendliness. She was always busy with school activities and with friends from school and neighborhood kids. After graduating from St. Anthony High School. She went on to attend two years of college at Incarnate Word College in San Antonia, Texas. She was to start her next two years at the U of Texas in the fall. A chance meeting of a young army Lt. at the drive-in across the street from her college changed her plans. That October she married her soldier, Wm. Tracy Moore Jr., in Beaumont and left with him for his training at Ft. Benning, Georgia. They had their honeymoon in New Orleans on the way to Georgia.

Tracy left to serve in WWII in Belgium and Germany. Lib then lived with her parents. Later, after their daughter, Colleen, was born, Lib and Colleen moved to Westwood, Calif., to live with her in-laws, Peg and Trace Moore, and her sister-in-law, Nancy Moore. After Tracy came home from the war and got out of the hospital, they continued living with Tracy's family until he graduated in 1946 from UCLA.

Lib arrived with Tracy and Colleen on the Peninsula here, for the first time, in July 1946. Coming with them to their beach lot in Ocean Park to tent camp were in-laws, Peg and Trace Moore; sister and brother-in-law, Nancy and Jerry Moore, Nancy’s mother, Al and the family dog, Nickie. The visit was supposed to be a short one to enjoy the beach, go clamming and visit the local friends and summer neighbors on their block.

That visit for Lib lasted 72 years. Tracy asked Lib if she would consider not going back to California and instead living here in Ocean Park, if he could find a job. So, they did. Colleen was eventually joined by three more children: Katie, Tracy III and Bridget. Several years later, Tracy and Lib bought Arthur Strand Insurance in Ilwaco where Tracy had been employed. Lib was at home with the kids as they grew up. Finally in 1970 she joined her husband at the insurance office. Lib worked with Tracy until they retired in 1984.Aftering retiring, Lib and Tracy were able to do the traveling they had always hoped to do. They made several trips to Ireland, and England. They saw most of Europe, also China, Indonesia, Greece, Egypt, Turkey and the Holy Land, often traveling with good friends.

Lib was an active member of many Peninsula organizations in her lifetime. The Village Club in Ocean Park that raised money for the Ocean Park Glide School, American Legion Auxiliary, Mentor Study Club, the Ocean Park Cemetery Association and the Altar Society of St. Mary’s Catholic Church in Seaview, Wash. Also several cherished groups, as a young wife, the Secret Pal Birthday Club where she and her friends who gathered in each others homes to play bridge when they could (also a time to have a break from being wives and Mommies). She spent a lot of her retirement years helping out her daughter and son-in-law Katie and David Williams, who lived locally, at two of their business, Daves’ Sport Shop at the Port of Chinook, Wash., and from 1995 to 2014 at Sweet Williams on Bay gift store in Ocean Park, Wash.

The greatest joys of her life were children, grandchildren and her little great-grandchildren. She is already missed by Colleen (Bill Morse) Britt and Geoff; Katie (David Williams) Carolyn and Sam Lord; Tracy (Betty); Bridget; Jessica and Nate Lord, Liza and Jay Tlougen, Julia and Trevor, Olivia and Liam. She has six “greats,” Sammy, Robert, Natalie, Ryder, Theo, and Rowley. Her grand and greats have fond memories of what they called “Nana’s Beach” one in Nahcotta and one in Klipsan Beach. Her beloved sister, Margaret; her eight nieces and nephews and their families, Pat, Mike, Greg, Katherine and Jim and Martha, Rae and Shelley, also survive her.

Lib brought a lot of warmth from her home state of Texas to Washington when she moved here in 1946. She was known for her big smile and her genuine friendliness. She really loved people, and would often give you a big hug and kiss.

When Mom left the Peninsula with her death 72 years after she arrived, she still believed the decision she made with her husband, Tracy, to make their home here at the beach, was the best decision of their lives.

Recitation of The Rosary will be held Sat., July 14th, 2018, 11:00 AM at St. Mary's Catholic Church in Seaview.  A Service will follow, 12 Noon, at St. Mary's with a reception following in the church hall.  Private committal at Ocean Park Cemetery.  Memorials are requested to either the Ocean Park Cemetery Association, PO Box 1001, Ocean Park, WA 98640 or St. Mary's McGowan Church Restoration Fund, care of St. Mary's Psarish, PO Box 274, Seaview, WA 98644.  Her guestbook is available at www.penttilaschapel.com.

To order memorial trees or send flowers to the family in memory of Elizabeth "Lib" Moore, please visit our flower store.