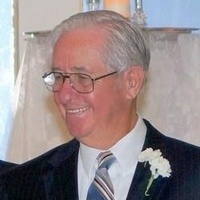 Gordon Victor Gillock was born at home in Sandy, OR on August 1, 1933.  He was the second oldest of six boys to Mahlon and Lola (Bacon) Gillock.  His family moved frequently and lived in various places in Oregon and Washington including Westport, OR; Roy, OR; Spokane, WA; and Walla Walla, WA.  He graduated from Walla Walla High School in 1951.  It was in Walla Walla, WA that he met his first wife, Bessie Conklin, and they were later married on June 11, 1953.

The newlyweds moved to Crescent City, CA in 1953 and lived there for two years.  In 1955, Gordon moved to Eugene, OR where he resided for ten years.  It is during this time that Gordon served his country in the US Navy from 1955 until his honorable discharge in 1961.

Gordon started his truck driving career as a young teen where he worked in the wheat fields of Eastern Washington helping his father in farming duties.  He then worked as a truck driver for a lumber company and later for Robert Motors in Eugene upon the completion of his service in the US Navy.  He then moved from Eugene, OR to Vancouver, WA in 1965 and lived there for six years where he worked for Atlantic Richfield Company (ARCO) as a tanker driver.


In 1971, Gordon moved to Scappoose, OR where he raised his family, served as a youth leader and later as an elder for the First Congregational Church in Scappoose until his retirement from ARCO in 1996.  He loved to read, fish, camp and tell stories with family and friends; and, upon retirement, Gordon took up a love for golf with a vengeance.

Gordon moved to Long Beach, WA in 2000 where he resided until his journey into the arms of Jesus.  After nearly 58 years of marriage, Bessie preceded Gordon in her journey to Heaven in 2011.  Upon his move to Long Beach, WA, Gordon also served in Flotilla 62 of the Coast Guard Auxiliary for nine years.

The Lord blessed Gordon with a second wife, Donna Oatfield.  They were married on October 27, 2012.  The two of them served as board members of Reachout Ministries which has served the Peninsula youth for 35 years. He served faithfully in his community and local church everywhere he lived.  Gordon filled the role of “father/grandfather” to many who needed one at different times throughout his life.  He enjoyed camp hosting in state parks and spending time with his children and grandchildren.

A celebration of life service will be held on May 12th at 2pm at Ocean Park Community Church (26709 Vernon Ave, Ocean Park, WA, 98640).  Interment will be at Willamette National Cemetery on May 14th at 11am.

In lieu of flowers, donations may be made to Reachout Ministries, PO Box 59, Long Beach, WA 98631.

With a heart for God and love for man,

He gave his all to fulfill the Master’s plan.

A gentle giant, he walked strong and tall,

But in true humility, many times on his knees did fall.

To many a lonely soul, he often did attend.

He served his country on land and on sea,

So all of us could enjoy our precious liberty.

His concern for young people was immense and strong,

His goal was to help them from going wrong.

As Gordie is now walking on streets of gold,

He would encourage us to be strong and be bold.

Never give up in our stand for what’s right,

For there is great reward for walking in the LIGHT.

To order memorial trees or send flowers to the family in memory of Gordon V. Gillock, please visit our flower store.