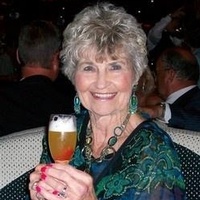 Betty J. Bledsoe, 90, passed peacefully on April 13, 2018 at her residence in Troutdale, Oregon. The daughter of Elmer and Eunice (Ham) Winkler, she was born in Salem, Oregon on November 12, 1927. Betty grew up in Southern California where she enjoyed the sun, beach and family. She attended El Monte and Monrovia high schools and following graduation studied bookkeeping at a business college.

On May 3, 1952 she married Charles Bledsoe, a family friend. The family lived in various locations as Charles was career US Air Force. Following his military duty of some 20 plus years, the family, which now included three children, settled in Boring, Oregon. With the children grown, Betty and Charles moved to Southeast Portland where Betty worked in several bookkeeping jobs. She enjoyed traveling, creating crafts, painting and baking. Most important of all to Betty was her family and her Christian faith. She was a member of Easthill Church in Gresham where she was active in Bible study and the Seasoned Saints group.

Following the death of Charles in 2011, Betty moved to a retirement community where she enjoyed playing cards, socializing and special events.

Betty is survived by her daughters Cindy Ault and Maureen Noblitt; son Charles “Chuck” Bledsoe; grandchildren Robin, Amanda, Jessica, Timothy, Jennifer, Jeremy and Misty; 6 great-grandchildren--with one on the way; and several nieces and nephews. She was preceded in death by her parents, her husband Charles, brother Elmer “Bud” Winkler, and sister Margie Budworth.

Memorial service will be Monday, April 30th, 2018 at Easthill Church in Gresham. Graveside rites and burial will be that morning at Willamette National Cemetery. Her guestbook is available at www.penttilaschapel.com.

To order memorial trees or send flowers to the family in memory of Betty J. Bledsoe, please visit our flower store.