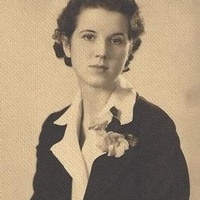 Rhea Davis was born in Portland, Oregon on July 27, 1916. She was the youngest of three children in a humble, working class family. Her father made a living as a carpenter.

Rhea grew up in the Mount Scott area of Portland until her father built the family home in Milwaukie. During the two year construction of that home the family all lived in a loft room above the garage. Rhea graduated from Milwaukie High School in 1934.

She met her husband Robert (Bob) Davis on an elevator at Robert's Brothers department store in downtown Portland where she was working. The families had known each other for several years before they started dating.

Rhea, Bob and their sons Ross and Bruce moved to West Seattle in December of 1949. She worked various retail jobs including working at the flagship Sears. Roebuck & Co. store on 1st Avenue.

Following the death of her son Ross in 1959 she founded the Ross A. Davis Rheumatoid Arthritis Guild in West Seattle.

Her son Charles A. (Drew) Davis was born in 1961 and in 1966 her husband took a transfer to a job in Montesano, Washington. The family lived a short time in Montesano while Bob built the family's new home in the Central Park district of Aberdeen. Twenty one years ago Rhea moved to Naselle with her husband.

She is survived by her sons Robert Bruce Davis and Charles Andrew Davis. She was preceded in death by her son Ross, husband Bob, sister Nell and brother Earl.

Memorial service will be Saturday, April 14, 2018, 12 Noon at the Naselle Lutheran Church with a reception following. Memorial donations may be made to the Children's Orthopedic Hospital in Seattle in care of Penttila's Chapel, PO Box 417, Long Beach, WA 98631.

To order memorial trees or send flowers to the family in memory of Rhea K. Davis, please visit our flower store.