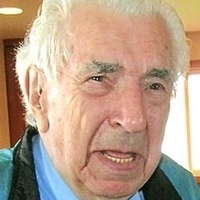 Albert Andrew Carrasco was born Aug. 15, 1922 in Kelso, Washington to Juana and Andres Carrasco, immigrants from Spain. He died March 7, 2018. He was the youngest of seven children, three of whom were born in Spain.

Al grew up on a farm in Rose Valley, working hard from the time he was a small boy. His best childhood friends were his sister Elizabeth, brother Andrew, his older sister Lucy’s sons, Tony, Gus and Andy Fernandez and his brother Frank’s son, Frank Carrasco, Jr. Al attended Rose Valley Elementary School and Kelso High School, graduating in June 1941.

In June 1942, Al enlisted in the Army-Air Forces. There he underwent training as a gunner and became a gunnery instructor. He was deployed to Europe and based in Italy. He was a gunner on a bomber plane and flew on many missions over Italy and Germany. He was honorably discharged in December 1945.

After coming home from the war, Al was employed at Montgomery Ward in Longview, where he met a beautiful young woman, Cecilia McAneny. They were wed May 1, 1948, and were married nearly 51 years until her death in April 1999.

Al and Cecilia were not able to have their own children, but over the years they were the beloved uncle and aunt to numerous nieces, nephews, grand-nieces, and grand-nephews, raising two nephews. They also took in and cared for Cecilia’s father and her ill brother, who Al continued to care for after Cecilia’s death. Al and Cecilia lived in various Oregon cities due to job transfers. Their last residence was in Vancouver, Washington.

In 2007, Elizabeth and David Johnson convinced Al to move to llwaco where he lived independently. He made many new friends and got back to his favorite pastime, golfing. The past six years, he was at Golden Sands Assisted Living Facility, where he enjoyed friendships with residents and the staff who gave him wonderful care. Al liked participating in the activities there, especially the Tuesday poker game and happy hour, two Fridays a month. He also continued to play golf up until his 94th birthday.

Al was a hard-working, honorable and kind man who had family and life-long and new friends who loved him. He will live on in our memories forever.

There will be a memorial service to celebrate Al’s life on Saturday, April 7 at 2 p.m. at the Peninsula Senior Center. A light lunch will be served.

In remembrance of Al, contributions may be made to The Boys and Girls Club of the Long Beach Peninsula, an organization to which he donated over the years.

Please share a memory on his guestbook at www.penttilaschapel,com

To order memorial trees or send flowers to the family in memory of Albert A. Carrasco, please visit our flower store.