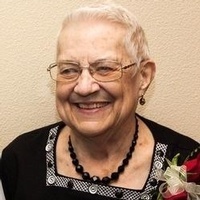 Donna Kay (Cole) Freese was born in McConnell, Illinois at the home of her grandparents Frank & Emma Cole on her Aunt Hazel Shippy’s birthday – September 4, 1935, the second daughter of Curt and Oresta (Stabenow) Cole.

She spent her youth in Stephenson County in northern Illinois going to small country schools where her father taught. She graduated from Orangeville High School in 1953. She met Stuart John Freese and they were married on March 7, 1954.

She spent many summers in northern Minnesota with her family and later at the family cabin on Lake Gust. Donna loved to travel and she and Stu took many vacations traveling around the United States, Canada and Mexico.

They made their first home in Fayetteville, NC where Stu was stationed at Fort Bragg. Then returned to Northern Illinois where they raised their two children Marla Jo & Jeffery Lynn. Donna worked outside the home for a few years as a bookkeeper in Freeport, IL.  Stu’s career took them to Circle, Montana and then to the Washington Coast settling in Long Beach then to Vancouver and upon Stu’s retirement back to Long Beach.

While living in Long Beach in the late 70’s Donna took up quilting and quilted with the Ocean Park women at the Ocean Park grade school. She made various baby quilts given as gifts and later for her three granddaughters. Donna was a member of the Ocean Park United Methodist church and attended regularly.

She enjoyed her family and friends. In later years her memories began to fade and a special friend Ivona Scarborough came into her life. The family wishes to thank Ivona and the caregivers at Clatsop Care Memory Center for their kindnesses and care of Donna. She was proud of her children, Marla Jo (Freese) Johnson, (husband Jack) and Jeffery Lynn Freese, (wife Sue Sutherland Freese) and her beloved granddaughters Kathryn Ann, Kristina Lynn and Kelly Michelle Freese.

Donna was preceded in death by her beloved husband of 63 years Stuart, her parents and two nephews Bruce Cole Bostian and Brad Mark Bostian.

She is survived by her children, grandchildren, her sister Joan Faye Bostian Berryhill and her niece Chrystal Jo Bostian and nephew Glenn David Bostian, as well as her step-granddaughter Janet, her children and grandchildren.

Donna didn’t care for cooking but loved to bake. She loved anything chocolate and had a sign in her kitchen which said “Did you ever notice…. There are no recipes for leftover chocolate”.  She collected angels later in life and now she is with them.

Donna will be remembered for her beautiful smile accented by her dimples and the twinkle in her eyes. We wish we could see that beautiful smile and twinkle one more time. She will be missed by many: mother, grandmother, sister, aunt, friend.

Her graveside services will be on Saturday, March 17th, at 11 Am at Lone Fir Cemetery. The family invites you to join them for a reception of refreshments and stories at the Ocean Park United Methodist Church following the graveside service.

In lieu of flowers, please feel free to contribute to the Alzheimer’s Association, South Pacific County Humane Society or the charity of your choice.

Arrangement by Penttila's Chapel by the Sea. Please sign guestbook at www.penttilaschapel.com

To order memorial trees or send flowers to the family in memory of Donna K. Freese, please visit our flower store.