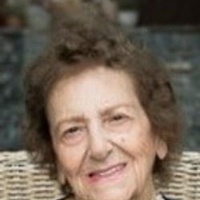 Marie T. Wagner passed peacefully on January 2, 2018, in Laguna Hills, California. She would often say that her beloved Joe was waiting for her. Marie was 95 years old and lived a rich full life filled with family, art and travel.

The daughter of Mateo and Maria Culotta who in 1903 emigrated from Sicily, Italy to settle in Buffalo, New York. At 19 she met Joe Wagner at a local social event. They fell in love, and married Oct. 17, 1942. They had three children in Buffalo before moving to Orange County, Calif., in 1951 where they would add four more children to the family. She was a full time homemaker with seven children to raise.

Upon Joe’s retirement, they moved to Ocean Park, Washington. Marie began a lifelong interest in art while in California taking numerous ceramic classes eventually transitioning to paint, paper productions, the use of fibers as an art medium, watercolors and fish rubbings. From 1972-1980 she was a member of the Orange Art Association (CA); from 1982-2009 a member of Peninsula Arts Association (WA). She continued her art education in Washington developing and perfecting her craft.

Marie moved back to California 10 years ago to be closer to her daughter, Sheila, who assisted Marie with errands and medical appointments. Marie would also enjoy her two sons, Matthew and Robert’s families. She greatly enjoyed her time at Villa Valencia joining in all the activates they had to offer. She especially enjoyed dancing to live music, the weekly bingo games, movie nights, and outside travel to local destinations. Church and prayer were a big part of her life and she enjoyed attending St. Nicholas Catholic Church every Sunday.

Marie received many awards during her art career but her most prized recognition was her submission for the 17th Annual International Kite Festival 1998 in Long Beach, Wash. Her poster “ Dragonfly Kite” won first place.

Funeral Mass will be held at St. Mary’s Parish in Seaview on Saturday, Jan. 27.; Rosary at 9:30 a.m. and Mass at 10 a.m.  A reception will follow at the Church.  Concluding graveside service and burial next to Joseph will be at Ocean Park Cemetery.

Viewing will be Friday the 25th, 12 Noon to 7 PM at Penttila's Chapel by The Sea in Long Beach.  Her guestbook is available at www.penttilaschapel.com.

To order memorial trees or send flowers to the family in memory of Marie Wagner, please visit our flower store.