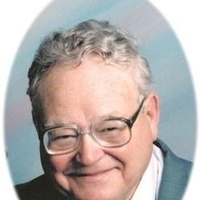 Jim went home to be with the Lord on November 5, 2017. He was 93 years old. Jim was born in Fresno, California to Robert and Yvona Patterson in 1924 and the family moved to Seattle, Washington in 1930. He attended Olympic View Grade School and graduated from Lincoln High School in 1942. While there, he played trombone in the band and also lettered in football.

Immediately following graduation, he was drafted into the army. He started out in the Graves Registration Unit but upon arriving in England, asked for a transfer and received it. His original battalion landed on D-day and ¾ of them were wiped out. His new division landed a month after D-Day and working their way through the hedgerows were part of liberating Paris. For the remainder of the war he was stationed in Paris as a quartermaster at headquarters.
After his discharge from the army in 1945 he began attending Seattle Pacific College where he met and married Mary Ellen Erb. Jim graduated from SPC in 1950 with a BA and BED degree. Jim’s main school that he taught orchestra/band and German at was Wilson Junior High, located in Seattle. In the early 60’s Jim was one of the official Frederik and Nelson Santa Clauses. Also during the summers, he worked as an Immigration Officer at the borders at Point Roberts, Lynden, and the SeaTac Airport. Always seeking to further his education he took a sabbatical to go to school at Western Oregon University in Monmouth, Oregon. He received a Master’s Degree in Educational Psychology in 1969. Jim then worked in that capacity for the Seattle School District until retiring in 1989. He was a well-loved teacher and many students received their love of music through Jim’s teaching.
In 1990, an opportunity opened up for him to teach in Vienna, Austria at an International School for a year. So he and his wife moved to Vienna for a year and enjoyed traveling to other countries close by.

After moving back to the Seattle Area, Jim and Mary Ellen decided it was time for them to move into their beach house at Long Beach full time in 2005. They had bought the property in 1980 and started building their house in 1986. Jim loved the beach, especially the winter storms.

Funeral service will be Saturday, November 18, 2017, 1:00 PM at Ocean Beach Presbyterian Church, 5000 "N" Place in Seaview.  A reception follows at the church.  Graveside service with military honors will be Monday, November 20th, 1:00 PM at Evergreen-Washelli Memorial Park in Seattle.

Jim's casket will be open Friday, November 19th, 10 AM until 4 PM at Penttila's Chapel by The Sea in Long Beach.  His guestbook is available at www.penttilaschapel.com.

To order memorial trees or send flowers to the family in memory of Robert J. "Jim" Patterson, please visit our flower store.