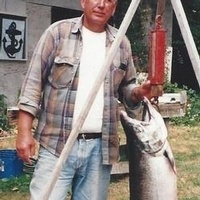 Ronald George Nenow was born in Eugene, Oregon in 1935, the son of Harold "Slim" and Amanda "Elsie" Nenow.  He had an older brother Hollis who preceded him in death in 2016.

The family moved to Portland where Ron graduated from Cleveland High School in 1953.  He was a member of the "Galloping Ghosts" basketball team which won the Portland city championship in 1952.  He was later inducted into the Cleveland-Commerce High School hall of fame in 2015.

Ron attended Portland State University and drafted into the US Army, serving during the Korean Conflict.  While serving in the Army he earned the lifetime nickname of "Too Tall" to fit into the Army pup tent.  He was a clerk and played on the basketball team during his Army service.

Returning to Portland he met and married Clairene (Fredricks).   They've been married 55 years.  Ron retired from Blitz-Weinhard Brewing and enjoyed fishing and winters in Mexico.

Ron was an exceptional person, loved by all his friends and family.  He passed away at his home in Chinook on August 17th.

A celebration of his life will be held at the family residence in Chinook, 23 Bayview, on Sat., September 2nd beginning at 2:00 PM.  All are welcome.

His guestbook is available at www.penttilaschapel.com.
To order memorial trees or send flowers to the family in memory of Ronald George Nenow, please visit our flower store.