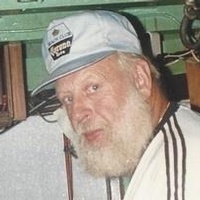 Rodman Allan Miller aka “Big Daddy” passed away in his home in Chinook on August 12, 2017 with his wife Nena by his side. Born in Tacoma, Washington on November 14, 1929 to Ernest and Helen Miller, he had four siblings Pat, Marge, Jane and Shirley.

He attended Stadium High School where he played baseball, hitting better than a .500 clip and received three pro offers. But, his senior year, he was injured playing first base which ended his opportunity to go forward playing ball.

He then served in the US Navy from 1950 until 1954. After that he moved home and played semi-pro ball and worked for a gas plant that put him in a position to move to Naselle and work for the Federal government at the Radar Base Station.

But deep in his heart his dream was to commercial fish, so in 1965 he bought his first boat the f/v Lorrine and fished up and down the coast, owning five different vessel in his lifetime until he retired at 78.

When he wasn't working, his favorite pastimes were hunting and sports fishing. He was also an avid Mariner and Seahawk fan and would hardly miss a game!

He is survived by his children Rod Jr. and Marcene, Bill and Nancy, Debbie and Dan, Andy and Corinna, Kevin, Jeremy and Dabra; grandchildren Aaron and Jeanne, Heath and Jessica, Brooke and Jay, Jessie and Jim, Hunter and Rachel, Kenny and Joey, Alexis and Josh, Alea and Tyler, Andrea and Daniel, Anthony and Aliscia; great-grandchildren Halle, June, Hayden, Seana, David, Drea May. He is also Survived by numerous nieces and nephews.

To order memorial trees or send flowers to the family in memory of Rodman Allen Miller, please visit our flower store.