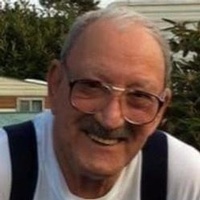 Thomas ‘Tom’ Edwin Walker, 85, passed away at home in Ocean Park, WA. on August 12, 2017. Tom was born June 1, 1932 in Thorpe, WA. to Arthur ‘Frank’ Walker and LaVerne Olson. Tom was raised on a farm in Eastern Washington, hunting, fishing, and working hard. He loved to help his Gram & Grandpa Walker on their fishing raft.


Roberta Madden and Tom married in 1971, blending Roberta’s 5 children with his own.


He worked many jobs through his life, and retired from the U.S. Postal Service in 1980.


Tom was an avid outdoorsman, who lived to hunt, fish, camp and hike. His wealth of outdoor knowledge and experience were immense, rivaled only by his vast trove of stories and tall tales. He generously taught these skills and passed on that love of the outdoors to countless people, inspiring a wide legacy that will continue through many generations of hunters and campers. He also loved to buy, sell, and peruse cars, trucks and all manner of RVs. It’s probable he would set a record for the number of trailers, pop-ups, fifth wheels, motor homes, tents and canopies he has owned.


Tom lived up to the quote “He never met a stranger”. He loved to shoot the breeze, was never without a story or a joke, and could talk to anyone about anything-although fishing was a frequent topic.


Patriarch of a large clan, family was everything to Tom. He was a loving and loved husband, father, step-father, brother, uncle, grandfather and great-grandfather.


Tom is survived by his wife, Roberta, his children, Frank, Cheryl, Kathleen, Annie, Nancy, Thomas, and Michael, his sisters Maureen and Marianne, his step-children Pat, Vicki, Colleen and Michael, many that he considered like his own, Ken, Jeff, Jeanie, Jacob, Joanie, Joel, many well loved daughters and sons in law, 29 grandchildren, 25 great grandchildren, numerous cousins, nieces and nephews, and one canine ‘son’ Ernie. He was preceded in death by his brother William, his stepson Robert, grandson Stephen, great-grandsons Elliot and Damon, nephews Todd and Jacob, and loyal dog Murphy.


A casual gathering to share stories and remembrances will be held on Thursday, August 17th @ 2pm Penttila’s Chapel by the Sea in Long Beach. In lieu of flowers, donations can be made to Disabled American Veterans Charitable Service Trust.

To order memorial trees or send flowers to the family in memory of Thomas Edwin Walker, please visit our flower store.