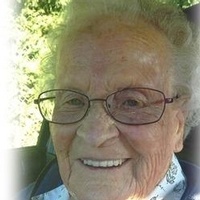 Deep River resident Edna S. Jarvi, 97, died in Astoria on May 16, 2017.  The daughter of Joseph and Sandra (Hendrickson) Kurtti, she was a life long resident of the Deep River area.  She married Arnie Jarvi on September 1, 1942 and they were married 65 years until his death in 2008.

Edna was a wife, mother and homemaker.  In past years she worked in area canneries.  She was proud of her Finnish heritage and a member of the Seal River Apostolic Lutheran Church.  She enjoyed fishing, clamming, camping, the outdoors and family events.

Survivors include daughters Patricia Frazier, Dorothy Richards, Marjorie Whitlock; sons Richard Jarvi and James Jarvi; 12 grandchildren; 11 great-grandchildren; and one great-great grandchild.  Besides her husband, she was preceded in death by sons Melvin Jarvi and Willard Jarvi.

Graveside service was May 20, 2017 at the Seal River Cemetery in Rosburg.

Her guestbook is available at www.penttilaschapel.com.
To order memorial trees or send flowers to the family in memory of Edna Sylvia Jarvi, please visit our flower store.