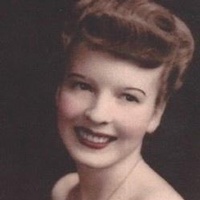 Loved by many and adored by her family, Donna Lou Lundberg joined her parents and twin sister in heaven on May 4, 2017.

Born in 1927 to Joe and Estela Trunde, she graduated from R.A. Long High School in Longview with her sister Betty and best friend Eunice. Her first job was at Sparks Motor Company in Longview. At the age of 19 she was swept off her feet and proceeded to marry a debonaire young man in uniform she had met at Woolworth's soda fountain in Longview. His name was Lloyd Lundberg.

Always proactive, she was a member of the P.T.A., a Cub Scout den mother, Little League score keeper, playground teacher and school bus driver. She taught her her children to be respectful and polite to everyone.

In 1962 she and Lloyd built a two-story cabin on the north slopes of Mt. St. Helens. Every available weekend they lived in paradise which they considered their “real” backyard, hiking and exploring, trekking through the snow in winter; swimming and motor boating in summer. By 1978 she and Lloyd moved from Longview to the banks overlooking the Toutle River where Donna swam in the morning ans watched deer swimming to the river island out from their front window. Another paradise.

Following their nuptials, Donna became a “boat puller” in southeast Alaska, commercial trolling with her husband. One morning Lloyd was under the weather and gave the helm to Donna to steer and fish. When he awoke he found her in the stern, wriggling amongst salmon covering the deck. She was covered with salmon blood and crying. Lloyd said it was the most romantic thing he had ever seen. She became a land lubber thereafter.

Unfortunately in the month of May 1980, time stopped. Seconds following the eruption of Mt. St. Helens their cabin was covered under 500 feet of pyroclastic flow. As they stood high above the river, they watched her parents house roll by, not knowing that their house too was picked up and swept down river. Donna and Lloyd taught themselves and their children right then that possessions are unimportant in their lives.

Amazing woman; amazing life. Always beautiful, honest, and feisty with a spare shoulder, she was and still is a matriarch, muse, fiercely protective, and she will be missed by all. Another member of the greatest generation, always in our hearts.

A celebration of her life ill be announced. Her guest book is available at www.penttilaschapel.com.

To order memorial trees or send flowers to the family in memory of Donna Lou Lundberg, please visit our flower store.