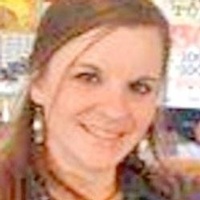 VANCOUVER — Ocean Park resident Adrienne Louise Raff, 40, lost her heroic battle with cervical cancer on Jan. 28, 2017, at Ray Hickey Hospice House in Vancouver, Wash., with her loved ones by her side.

She was born Dec. 15, 1976, in Vancouver, the daughter of Patti Addams and Kenneth (John) Raff. Adrienne spent her early years in Orchards, Wash., until she was 11, when she moved with her mother to the Long Beach Peninsula.

One of her first jobs was at the Super 8 Motel when it opened and she worked at a few restaurants until she turned 21 and decided to be a bartender. Adrienne also lived in Longview for several years with her partner and three wonderful children. While living in Longview she worked for many years at the Moose Lodge. In 2010 she moved back to the Peninsula with her kids and worked for more than a year at the Moose Lodge in Ocean Park. She also tended bar at the Lamplighter in Seaview, and at the Lightship and the Tides both in Long Beach. She really enjoyed tending bar and she became very good at her job.

Born with the gift of gab, a bubbly personality and a smile that could light up any room, it wasn’t hard for her to win the hearts of many. Adrienne loved life, and her wonderful sense of humor and big heart made it easy for her to make friends no matter where she went. She was always ready to step-up and defend the underdog, and she would literally give the shirt off her back to anyone in need. Her loyalty to those she loved was true and strong. Her infectious laugh, playful spirit and kind soul were a gift to all who were blessed enough to experience the magic we called Adrienne. The church she attended had no walls; the outdoors was her place of worship. Love and compassion were her religion.

Her other interests were working in her yard, mushroom picking, beachcombing, drawing, cooking, music and spending time with her family, friends and her faithful rat terrier, Willow.

Survivors include her mother, Patti of Ocean Park; father, John, of Vancouver; brother, Kristopher Buen of Vancouver; sons, Kristopher Raff of Battle Ground and Wyatt Christen Jr. of Longview; daughter, Melea Alexander of Longview; grandson, Dylan Lavine-Raff of Battle Ground; several aunts, uncles and cousins. She is preceded in death by both sets of grandparents and her brother, AJ Addams.

A celebration of life will be announced at a later date.

To order memorial trees or send flowers to the family in memory of Adrienne Louise Raff, please visit our flower store.