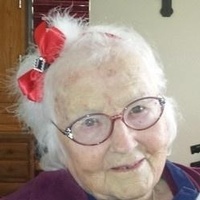 Gladys Inez Berley a resident of Long Beach WA passed away on February 14, 2017 in Long Beach, WA of natural causes. She was 96. A viewing will be Tuesday, February 21, 2017 from 11AM to 1PM at Penttila's Chapel By the sea in Long Beach, WA. A celebration of Life and Reception will follow at New Life Church in Ilwaco, WA.  Gladys was born in Alamo Tennessee to William and Minnie (Mayes) Speer on February 28, 1921.  As a child, she helped her family picking cotton to help support the family. She met William Berley and they married December 24, 1938. She worked as a cannery worker,homemaker and she was a member of the Assembly of God. She enjoyed crafts-plastic canvas crafting jewelry and crystal tree ornaments. She also enjoyed traveling with her husband. Survivors include two sons, Harold and Dewayne Berley both of Sacramento,CA. A daughter Shelba (and husband Steve) Marracci of Ilwaco, WA. A sister Velma Brown (and Husband Paul) of Arizona. A sister in law Ione (JB) Speer. Grandchildren Jason Derrey, Angie Palacios (and husband Anthony), David Grimberg, Julie Thornberry (and husband Loren). Great-Grandchildren Zack and Brendin Palacios, Noelle and Caitlin Derrey. She is also survived by numerous nieces and nephews. She was preceded in death by her brothers De Witt Speer, JB Speer, Mayes Speer and William Speer Jr. A sister Eunice(Ameline) Speer and her husband William Berley who passed away December 4, 2003.

Her guestbook is available at www.penttilaschapel.com.
To order memorial trees or send flowers to the family in memory of Gladys Inez Berley, please visit our flower store.