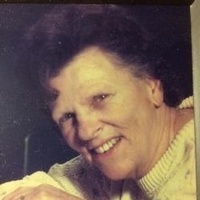 Betty was born January 23, 1929 to Bert and Dorothy Moore in Bozeman, Montana.  An only child, Betty grew up embracing life and her Montana roots with pride and boundless energy...and becoming a bit of a challenge for her parents along the way!

Betty moved to Denver to pursue her nursing career early in her adult life, where she met the man she knew would some day become her husband, Ed Manning.  Betty and Ed were married in December of 1953 while Ed was serving in the United States Air Force.

Once discharged, Betty and Ed moved to Seattle where Ed began his career at the Boeing Company and Betty threw herself into her new career as a housewife and mother.

Throughout her life, Betty’s family was always her top priority.  She was fiercely proud of Ed as well as her sons Mike and Scott and their families.  Any accomplishment by any one of her family members, whether professional or personal, brought her tremendous pride and pleasure.  And she was quick to passionately share her pride with everyone she encountered.

While raising her family and running the household, Betty embraced several passion points with the same gusto with which she lived her life.  One of her favorite activities was bowling, becoming a big part of her life throughout the years.  Betty played in multiple bowling leagues simultaneously while living in the Seattle area and later during retirement while living in Ocean Park, Washington.  With too many tournament patches and pins to count, Betty bowled with passion, making many wonderful friends along the way.

In 1990, Betty and Ed retired to Ocean Park, Washington, building their retirement home in Surfside, where they lived until Ed passed in 2006. During their time in Ocean Park, they both established many great friendships through their church, various social clubs, bowling and working on their respective genealogy history.

After Ed’s passing, Betty spent several years on the Peninsula before relocating to Kent, Washington to be closer to her sons and grandchildren.  Betty resided in Kent until her passing.

As dementia took over her life, Betty spent her last years in the loving care of her family and the dedicated and compassionate staff of Arbor Village Continuing Care Center.  The team of caregivers always treated Betty as if she was part of their family until the final hour that Betty passed.  The Manning family will forever be grateful to everyone at Arbor Village for their love and care for Betty.

Betty is survived by her sons, Michael and Scott, as well as Michael’s family including his wife Virginia and their children (Betty’s grandchildren) Rebecca, Katherine and Christina.

In lieu of flowers, the family asks that remembrances be made in Betty’s name to any Alzheimer organization, the American Heart Association or a charity of your choice.

To order memorial trees or send flowers to the family in memory of Betty Rae Manning, please visit our flower store.