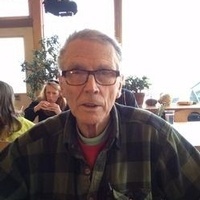 Clifford Earl Simmons, 86, died Wednesday afternoon, August 24th in Ocean Park, Washington.  Born April 15, 1930 in Oakland, California to Ruth and Leon Simmons, Clifford had youthful adventures during his childhood in the East 14th Street neighborhood, and attending Lockwood School. He joined the Air Force at age 17, travelled the world in 23 years of military service and served in one of many flight crews which stood by for Apollo splashdowns. While stationed at Hanscom Air Force Base in Massachusetts he met and married Theresa Heggarty in 1957. Together they raised three children, and settled in Seattle, Washington when Clifford retired from the Air Force. He worked at Boeing making 747 airplanes, and then at the U.S. Post Office’s downtown Terminal Annex on 3rd and Union. When he retired from the USPO in 1994, Clifford and Theresa moved to the Long Beach Peninsula to benear their daughters.  Clifford lived a long and active life. He loved owning and working on many cars in his lifetime, and also had a life-long passion for woodworking. He could always be found building something or puttering in his shop. Clifford was a fan of found-materials, haunting his favorite spots of Waikiki Beach and various pallet-stacks around the peninsula. He made many friends throughout the years, often through giving the gift of his famous “Shaker Step Stool” to those he met. He was generous and filled with stories, always ready to share his tales of travel, adventure, and a love of history, geography and his favorite classic movies, Seven Samurai, Andrei Rublev, The Four Feathers or Lawrence of Arabia. He loved George Gershwin, Hollywood musicals and Don McLean’s American Pie. Clifford’s passing was peaceful and comfortable with his family and caregivers in his home at Golden Sands Assisted Living. He will be remembered by many, most especially by daughter Patty Brewe and granddaughters Carlyn Brewe, Casey (Matthew) Palmgren, Blair (Stephan) Oman, and great-granddaughter Sloane Oman, along with daughter Geri Marcus and her husband Jeff, andgrandsons John Luke and Elliot Marcus. He was preceded in death by his wife, Theresa Simmons in 2001 and his son Clifford E. Simmons Jr, in 1983.

His preference was for a private, family celebration of life. Those who knew him are invited to share memories and photos of more than 300 gifted step-stools on the FaceBook page, “Papa Made Me a Stool,” or by signing Pentilla’s Chapel by the Sea online Guestbook.

To order memorial trees or send flowers to the family in memory of Clifford Earl Simmons, please visit our flower store.