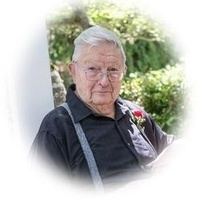 Joseph M. Gisler, a life long resident of the Peninsula, passed away at the age of 99 on July 25, 2016 in Astoria. He was the son of Martin and Elsa Gisler both of whom were Swiss immigrants. His father was supposed to come from Switzerland to the United States on the steamship Titanic but the ship was overlooked. He later caught another ship, and his mother followed about a year later.

Joe was born in a cabin on 10th Street and Idaho in Long Beach. He was an Ilwaco High School graduate with the class of 1935 and the oldest living alumni when he passed. He married his wife, Natalie Barbara Peterson on August 8, 1942 and they established their first home in Seaview around 1949 to start their family.

Joe was working on the Columbia River seining grounds when he was drafted in the US Army. Following his military service he went to work for Kirkmand & Strand (building contractors) for several years. He began his own construction business in 1952 and retired in 1964. Joe built numerous homes and businesses on the Peninsula, where he left his mark for quality workmanship.

Joe was baptized at St. Mary's Catholic Church in Seaview where he remained active until his death. He was a life time member of the VFW Post #3721 and Long Beach Elks #1937.

Joe loved to travel with his wife and they were snowbirds from 1981 until 2007. Hunting and fishing were special interests and when he was unable to pursuit those activities he took up canning and smoking fish. He was very well known for his excellent smoked fish.

Joe was preceded in death by his wife Natalie Barbata Gisler, and son Norman Martin Gisler. Surviving are his three daughters: Joan Tolby of Kelso and her children Jim, Jeff, Julie, John, Baron and Grace; Verla Rayburn of Long Beach and her daughter Stephanie; and Sally Wright of Long Beach and her children Josie and Cody; Norman's children Tracy and Amanda; and three great-grandchildren.

Recitation of the Rosary will be held Friday, August 5, 2016, 7 PM at St. Mary's Church in Seaview. Memorial Mass will be celebrated at St. Mary's at 10:30 AM on Saturday August 6 with a reception following. Concluding graveside rites with military honors will be held at Ilwaco Cemetery at 2 PM.

Those who wish to honor Joe's life may donate to the organization of their choice. His guestbook is available at www.penttilaschapel.com.

To order memorial trees or send flowers to the family in memory of Joseph M. "Joe" Gisler, please visit our flower store.