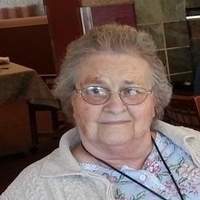 Beverly Jayne Gilpin died March 17, 2016.  Beverly was born in Spokane Washington in 1931, where she graduated from Lewis and Clark High School, followed by Kinmen Business School.  She married Eldred Gilpin in 1954.  The couple made their first home in Nespelem WA where she worked at the post office and Colville Indian Agency.  Later the couple moved to St John, WA.  In 1959, they began their life on the Long Beach Peninsula.  The house on Stringtown ebbed and flowed in size with the addition of foster children, Beverly's daycare business, and numerous guests.  The latter of which led to the creation of Baker Bay Campground which proved to be a good match for Beverly's interest in meeting people and engaging in their lives.

As the children aged, Beverly began working at the Long Beach Pharmacy. She enjoyed this job and those she worked with for 17 years.

Once retired, Beverly and Eldred began traveling. By motorhome, they visited most of the states in the U.S. often wintering in southern Texas. They traveled to Africa, Europe, England, Mexice,  Western Canada and Nova Scotia, in addition to taking cruises. Beverly enjoyed these trips whether travelling with long-time friends or friends she made along the way.

A celebration of life will be held March 26, 1:30 pm at the Peninsula Senior Activity Center.

In lieu of flowers, the family suggests donations to one of her favorite charities:  Operation Smile:  https://secure.operationsmile.org or Heifer International  http://www.heifer.org/gift-catalog or to the Peninsula Senior Activity Center,  21603 O Ln, Ocean Park, WA 98640. Arrangements by Penttila's Chapel by The Sea, Long Beach.

To order memorial trees or send flowers to the family in memory of Beverly J. Gilpin, please visit our flower store.