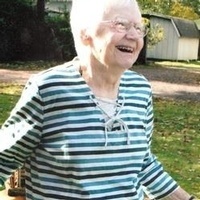 The daughter of Henry and Della Frahm, she was born on May 11th, 1924 in Danvers, Illinois. The third of five children, Ila spent a happy childhood in Illinois, graduating from Stanford H.S. in 1942. She met and married James Lorenz in 1950. After an assignment in Newfoundland, the young family transferred to March Air Force Base in 1957. They would go on to have five children, two sons and three daughters.

Ila owned her own real estate brokerage for 25 years, eventually moving into Escrow and Title Services. Ila was well-known for her talent and love of cooking. Friends, family and neighbors often enjoyed her dinner parties and many of her recipes are now family traditions. Ila loved to knit and made beautiful afghans for each of her children and grandchildren. She enjoyed watching all types of sports, especially baseball and basketball, most often rooting for the Dodgers or the Lakers.

Ila is survived by her sister, Imogene Foreman of Oceanside California; her children April Ziegenbusch of La Palma, CA, Alan Lorenz of Apple Valley, CA, Michele Morris of Ocean Park, WA, David Lorenz of Riverside, CA and Terri Aaron of Las Vegas, NV. Grammy will be greatly missed by her 17 grandchildren and 14 great-grandchildren.

A private memorial is planned for this Summer. Arrangements by Penttila’s Chapel by The Sea, Long Beach.

To order memorial trees or send flowers to the family in memory of Ila Louise Lorenz, please visit our flower store.