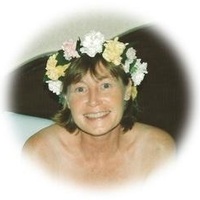 On March 9, 2016, Marie Teresa Soller Damron embarked on her last great adventure after many years of struggle with illness.

Despite her quiet beginnings in Cambridge, Ohio on August 20, 1954, Marie always sought out new opportunities and experiences. After living in multiple states along the East Coast, Marie came to Cary, North Carolina at the age of 18 where she studied at North Carolina State University and became the second ever female DJ at the then rock station WQDR in Raleigh. She worked at a few radio stations in different cities in North Carolina before setting off for her next great endeavor, this time in Dallas, Texas. Marie rose to great heights in corporate America as a business writer with clients all over the country, earning herself national and international awards for her writing. When she tired of the corporate experience, she moved on to the life of a rancher in south Texas. Never one to sit still, Marie traveled extensively, with Belize being her favorite place to go to get away.

In marriage, Marie found happiness winning the heart of Texas singer/songwriter/actor/folklorist Allen Wayne Damron. When she was not busy being a writer and Allen’s business manager, she worked in a local “ghost town” resort as the hotel operator, concierge, and town air traffic controller. Marie was the one to call at any time of the day or night when stray cows wandered onto the runway, preventing planes from taking off or landing.

After her husband’s untimely death in 2005, she travelled around the country as the tour manager for Rambling Jack Elliott. Never far from a pen, Marie continued to write about her musings and experiences as life allowed. Eventually, she sold her property in Terlingua, TX and most recently settled along the Pacific Coast in Long Beach, Washington. Marie was in Long Beach awaiting medical treatment when she died at the age of 61.

In lieu of flowers, the family asks that you make a donation in Marie’s name to the Health Alliance for Austin Musicians (https://www.myhaam.org), an organization that helps provide affordable healthcare resources to local musicians.

The funeral service will also be held in Cary, NC and a memorial will take place in Austin, TX as well.

Arrangements locally by Penttila’s Chapel by The Sea, Long Beach, WA and her guestbook is available at www.penttilaschapel.com.

To order memorial trees or send flowers to the family in memory of Marie Damron, please visit our flower store.