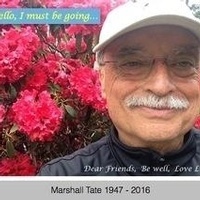 Marshall was born on March 21, 1947 in Detroit, Michigan. He studied at Michigan State and obtained his degree in biology from Wayne State University in Detroit. Although he moved away to Oregon in the early ‘70s, he maintained contact up until his passing with some of the friends that he started out with in kindergarten and grade school.

Marshall attended Oregon State University and earned his degree in pharmacy. He and his wife, Sue, moved to Portland in the late eighties and they both worked at OHSU for many years. Marshall was a neonatal pharmacist and loved working with the tiny babies.

Marshall and Sue moved to Ocean Park in 2004 where he became active in local politics, where he liked being behind the scenes, not on the stage. He also loved birding, travel, classical music, gardening, reading and good coffee.

Marshall succumbed to a very aggressive form of cancer on March 1. He is survived by his loving daughter Thea of London, England, and his wife, Sue. His big adopted kitty, Sonny, still looks for him every morning,

To order memorial trees or send flowers to the family in memory of Marshall C. Tate, please visit our flower store.