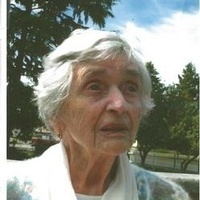 Martha C. Oakes, 96, a fifteen year resident of Long Beach, died peacefully at her residence on February 22, 2016. The daughter of William and Lula (Owins) Cummins, she was born September 24, 1919 in Rockcastle, Kentucky. In 1944 she graduated as a registered nurse from the Kentucky Baptist School of Nursing in Louisville. Following her schooling she enlisted in the US Navy, serving as a ensign in the nurse corps until the end of the war.

On October 15, 1948 she married Robert J, Oakes MD and they established there home in Orinda, California. Besides being a wife, mother and homemaker, Martha assisted her husband in his family medical practice in nearby Oakland, California. Fifteen years ago the couple moved to the Peninsula to be near family. Martha was fortunate to live in her own home until the end due to the excellent care from her wonderful caregivers

Martha was a longtime member of the Lafayette-Orinda Presbyterian Church and proud to be a registered Republican. She was an avid reader, dedicated gardener, and amazing cook (especially her apple crisp), skills she passed on to her sons. She closely followed political and current events and enjoyed a healthy and lively discussion of these topics, never shy to share her opinions. She was the matriarch of her family, a steady hand on the tiller, and a true lady of her generation.

No service will be held. Her family requests memorials to either the Ocean Beach School District Foundation or the Ocean Beach Hospital Foundation in care of Penttila's Chapel by The Sea, PO Box 417, Long Beach, WA 98631. Her guestbook is available at www.penttilaschapel.com.

To order memorial trees or send flowers to the family in memory of Martha C. Oakes, please visit our flower store.