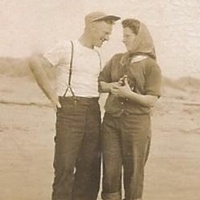 Darlene M. Haataja, 88, a life long resident of the Altoona-Rosburg area, died at her home in Rosburg on February 23, 2016. Both her father and mother were of Finnish ancestry, and she was born at home in Altoona on June 17, 1927, the daughter of Helge and Jenny (Buskala) Saari. She grew up on the family farm, attended Altoona grade school and graduated from Naselle high school.  Following high school she worked at the Altoona fish cannery.

In 1951 she married Deep River native Robert Haataja and they established their home close to where Darlene was raised.  She became a wife, mother and homemaker and she and Robert were also self-employed farmers.

Darlene was known to be an excellent cook, loved scrapbooking, gardening, tending her chickens, fishing and just being on her farm. She was also an avid berry picker who “put them up” for winter.  She was a faithful member of Valley Bible Church. In past years she and Robert enjoyed camping with friends and clamming.

Darlene is survived by her sons Loren (Connie) Haataja of Seal River, WA and Raymond (Mary) Haataja of Grays River, WA; grandsons Jeff, Jon, Jason and Matt Haataja; granddaughters Laura Haataja and Kori Newton; step-grandsons Doug Raney and Keith Fauver; and many nieces and nephews and great-grandchildren.  She was preceded in death by her daughter Nancy Newton, sister Vivian and husband Robert.

Graveside service will be held Sat., March 5, 2016, 11:00 AM at Eden Valley Cemetery, rural Rosburg. A time of fellowship follows at 1:00 PM that afternoon at Valley Bible Church in Rosburg. Her guestbook is available at www.penttilaschapel.com.

To order memorial trees or send flowers to the family in memory of Darlene Maria Haataja, please visit our flower store.