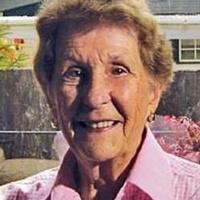 A lifelong Pacific County resident who moved to Long Beach from Yakima as a baby in 1918 with her parents Alden and Gladys (Powell) Redfern, Beechey was a loved and respected citizen of Ocean Park from 1937 until her death.

In a 2006 profile in the Chinook Observer, Beechey recounted her family’s deep connections to this area: “My great-grandparents, Augustus and Amanda Brown Moore, had settled in Long Beach in the late 1800s. Theirs was that yellow house on Sandridge Road at the east end of Sid Snyder Drive. They had four children, one of whom was my grandmother, Louise. She grew up here, and she and her brother went to the so-called ‘college’ in Oysterville.”

Along with her older brother Donald, her three younger brothers — Stanley, Dale and Melvin — and many friends, she spent an idyllic childhood on the Peninsula: rafting on flooded fields, going on a picnic trip in an open car to the Peninsula’s wild north end, riding the old Ilwaco Railroad and many other adventures.

“I can remember that during the summer we all went barefoot and, of course, we made our own fun. Girls played jacks, hopscotch and skipping rope. We all went swimming in the ocean on warm days or, if we had a 25 cent piece, we went to the huge indoor swimming pool, called a natatorium,” she recalled.

She attended Long Beach School. Adelle and all her brothers graduated from Ilwaco High School.

In the 2006 profile and in a later series of articles and the book “Sand Under My Feet” that she wrote for the Observer, she celebrated her courtship by Charles Robert “Bob” Beechey and their marriage in 1937, when they “moved into a little house in Ocean Park.” They celebrated their 63rd anniversary before Bob died in 2001.

An enthusiastic Democrat, she treasured voting for President Franklin Roosevelt when she was 22. She remained an active citizen throughout her life, volunteering for local betterment efforts. She donated all proceeds from her book to the Boys and Girls Club of the Long Beach Peninsula.

Adelle and Bob had two children, Dennis Robert Beechey and Kathleen Anne Beechey, both of whom reside in Central America. Also surviving are grandson Caleb Isaac Dittmer of Vancouver, Washington; Beechey-side nephews David Dorsey of Portland and Craig Dorsey of Roche Harbor; and numerous Redfern nieces and nephews.
To order memorial trees or send flowers to the family in memory of Adelle Beechey, please visit our flower store.