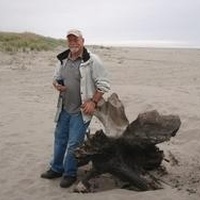 Thomas C. Leonard, 65 passed away on January 3, 2016. He was born in Hot Springs, S.D. on April 3, 1950 to Charles T. and Loraine (Caverhill) Leonard. He was the youngest of three children with a brother, Ronald and a sister, Lynda.

Tom grew up in Hot Springs, S.D. and was a 1968 graduate of Hot Springs High School. While in High School he was selected as one of 26 South Dakota High School Journalists for the All-State News Staff of S.D. High School Press Association.

Following adventure and his heart, he headed to Southern California, where he married Cindy (Hamilton) Marsh on Nov. 17, 1973 in Venice, California. Their adventure brought them North to Ocean Park, Washington in 1975, where they established a home and started a family. A daughter, Codie was born that year and a son, Christopher was born in 1977. After his divorce, he continued to live and work on the beach.

During his 40 years on the Peninsula, he crafted beautiful burl top tables, worked as a laborer at Ilwaco Boat Works, and was a seafood processor at the local canneries. He then went into the flooring industry and became a master craftsman in the field, working for Sharin’s Furniture as an installer before going into business for himself, running Peninsula Flooring until 2002. He continued his skills as a Survey Tech at HLB Otak until 2008. He worked several odd jobs on the Peninsula until his health forced his retirement in 2012.

Tom was a hard worker, but also knew how to have a good time. He enjoyed fishing, golfing, kite flying, biking, tending to his roses, sunning out in front of his place, and of course he loved a good beer and a good party.

In his kite flying days, he frequented all the local kite shops looking for the latest and greatest. We are pretty certain he was one of the originators to the kite surfing/sledding trends. Yes, that was Tom sledding down the beach in an old VW Bug hood from approach to approach. No doubt, with a cup holder mounted in it for his beer.

During Rod Run Weekend you could find his Schwinn Bicycle parked on the street in front of the Long Beach Tavern, next to all the tricked out motorcycles, not to be outdone by a motor! He loved his bike and Mum’s car, which he washed and waxed both so frequently that poor Mum’s car had little paint left on the hood.

Tom once noted, “Life isn’t about waiting for storms to pass, it’s about learning how to dance in the rain.” He danced. We will miss his loyal friendship, great sense of humor, and persevering spirit. He is survived by his daughter, Codie (Jacob) Daniels, his son, Christopher Leonard, 9 grandchildren, 2 step grandchildren, brother, Ronald Leonard, and his sister, Lynda (Bill) Lawrence.

Tom did not wish for a funeral or fussy memorial. He would rather you have a seat at LBT or Doc’s Tavern, raise a glass, have a beer and tell em’, Tom sent ya! Cheers Dad.

Love never gives up. Love cares more for others than for self. Love doesn’t want what it doesn’t have. Love doesn’t strut, doesn’t have a swelled head, doesn’t force itself on others, isn’t always “me first,” doesn’t fly off the handle, doesn’t keep score of the sins of others, doesn’t revel when others grovel, takes pleasure in the flowering of truth, puts up with anything, trusts God always, always looks for the best, never looks back, but keeps going to the end. LOVE NEVER DIES.         I Corinthians 13:4-8 (MSG)

Arrangements by Penttila's Chapel by The Sea.
To order memorial trees or send flowers to the family in memory of Thomas C. Leonard, please visit our flower store.