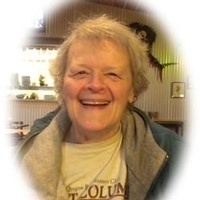 Judy Elizabeth (Church) Williams, 75, passed away on June 14, 2015, in Vancouver, Washington. She was born on November 23, 1939, in Astoria, Oregon, to Cecil Lewis Church and Opal Melissa (Baker) Church. Judy grew up in Chinook, Washington. She graduated from 8th grade at the Chinook School in Chinook, Washington, and from high school at Ilwaco, Washington, in 1958. During her high school years, she worked for the Chinook Packing Company. After high school, she served in the United States Army, where she met and married Leon David Williams. After discharge from the Army, they settled in Naselle and Chinook. After their divorce, Judy stayed in Chinook near her family. Judy enjoyed spending time with her children, often entertaining them with board games, walks to the beach, and frequent visits to play at Ft. Columbia. She earned money by babysitting, especially during the summer when people came to town to fish. She was a long-standing member of the Rebekah Lodge #78 (Ilwaco) and the United Methodist Church. She had been active in Junior Women and Christian Women's Club. As her children grew older, she returned to work at the Chinook Packing Company, where she worked until she suffered a stroke in 2004. She had a sense of humor, a kind gentle nature, and a positive attitude. Even as her body failed her, her spirit soared. She is survived by her sister, Dawn Lynn Ross (brother-in-law Fred Ross) of Columbia, Missouri; her children, Tamara Lynn Walker (son-in-law Scott Walker) of Astoria, Oregon; Gary Leon Williams of Chinook, Washington; and Tracie Melissa Stout (son-in-law Dusty Stout) of Vancouver, Washington; her granddaughter, Kassandra Swindler (married to Daniel Swindler) and their children Tyler and Grayce; and her granddaughter, Desirae Londo (married to Corey Londo), and their children Adley and Myles. Judy loved family, and her sister, children, grandchildren, and great-grandchildren brought her joy. She always looked forward to family gatherings. She was preceded in death by her parents, Cecil and Opal, and her ex-husband, Leon. A memorial will be held at the Chinook Lutheran Church, in Chinook, Washington, on Saturday, August 22, at noon. In lieu of flowers, the family requests memorial donations be made to Friends of Chinook School, P O Box 243, Chinook, WA 98614. Sign and share memories on the online guest book at penttilaschapel.com.
To order memorial trees or send flowers to the family in memory of Judy Williams, please visit our flower store.