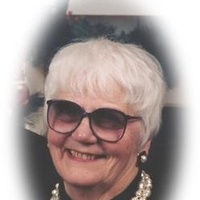 Korine J.Nelson, 93, a lifelong resident of Chinook, died in Raymond, Washington on May 24th, 2015. The daughter of Andrew "Sig" and Olive "Liz" (Thompson) Anderson, she was born in Chinook on October 10, 1921. Korine grew up in Chinook where she attended Chinook Elementary and was a graduate of Ilwaco High School. Korine was a customer service representative for Pacific County PUD#2 for 35 years. She was a life long member of the Evangelical Lutheran Church of Chinook where in past years she was active as church musician, served with the Women's Group and several other capacities. She also was a member of the Astoria Golf & Country Club. Korine enjoyed knitting, embroidery and gardening. She was married to Arville Nelson until his death. Survivors include several nieces and nephews. Memorial service will be held Saturday, June 13th, 2015, 2:00 PM at the Evangelical Lutheran Church of Chinook with a reception following. Private burial will be at Ilwaco Cemetery. Memorials are requested to either the Evangelical Lutheran Church of Chinook and/or Friends of Chinook School in care of Penttila's Chapel. PO Box 417, Long Beach, WA 98631. Her guestbook is available at www.penttilaschapel.com.
To order memorial trees or send flowers to the family in memory of Korine Jewel Nelson, please visit our flower store.