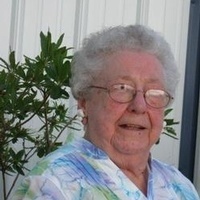 Naselle resident Berneice Rose Tienhaara, 92, died in Longview April 24, 2015. The daughter of Sam and Blanche (Treibley) Benson, she was born in Polson, Montana on March 31, 1923. There she grew up and graduated from high school. During the war years she moved to Portland, Oregon and it was there she met Reino Tienhaara, a recent veteran of the US Navy. They were married October 26, 1946. The couple married and soon thereafter moved to Naselle. There Reino began his career in the woods and Berneice became a wife, mother and homemaker. Berneice also worked at the "old" Okies Market in Naselle. She was a active member at the Community Congregational Church of Naselle where she participated in the Women's Auxiliary and the Martha Circle sewing group. Berneice was blessed with a friendly, outgoing personality and enjoyed many friendships in the community. She enjoyed reading, sewing, gardening and was always lending a hand as needed. Survivors include her son Tim (Martha) Tienhaara of Naselle; daughter Sharon (Warren) Renton of Melbourne, Australia; five grandchildren; nine great-grandchildren; sister Joyce Valley of Casa Grande, Arizona; sister-in-law Gloria Tienhaara of Naselle; and numerous nieces and nephews. She was preceded in death by her husband Reino; two brothers; two sisters; and her parents. Memorial service will be Saturday, May 16th, 2015, 11:00 AM at the Community Congregational Church of Naselle with a reception following. Family graveside service will be at Peaceful Hill Cemetery, Naselle. Those wishing may make memorials to the church at PO Box 1856, Naselle, Washington 98338. Her guestbook is available at www.penttilaschapel.com
To order memorial trees or send flowers to the family in memory of Berneice Rose Tienhaara, please visit our flower store.