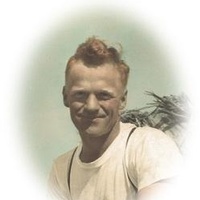 Life long Wahkiakum county resident Robert A. Haataja, 91, died in Woodland, Washington on July 16, 2014. He was born in Deep River, Washington on September 4, 1922, one of twins (Mildred) born to August and Mary (Hanson) Haataja. He began working in the woods at an early age and for the better part of twenty years was a "donkey engineer". During World War II he served with the US Army in the European Theatre with the 11th Armored Division, taking part in the liberation of the infamous Mauthausen Concentration Camp in Austria. He was a Technical Sergeant assigned to the motor pool. Returning home, Robert married Darlene Saari in 1951 and they made their home in Rosburg. Robert was employed for 21 years with the Wahkiakum county road department while also farming, an endeavor he enjoyed all his life. Together Robert and Darlene enjoyed such adventures as clam digging, hunting for deer and ducks, and camping with family and friends. One could tell when a camping trip was planned as he would always buy a loaf of raisin bread. Robert was a skilled carpenter, excellent mechanic and he was often found in his shop fixing any and everything that needed repair. Besides his wife of 62 years, he is survived by sons Loren (Connie) Haataja of Seal River, WA and Raymond (Mary) Haataja of Grays River; WA; four grandsons; two granddaughters; many nieces, nephews and great-grandchildren. He was preceded in death by his daughter Nancy Newton, brothers Arthur and Harold Haataja and twin sister Mildred Laine. Family, many neighbors and friends attended his funeral service July 20, 2014 at Valley Bible Church in Rosburg which Robert faithfully attended. Concluding graveside service followed at Eden Valley Cemetery, rural Rosburg. His guestbook is available at www.penttilaschapel.com.
To order memorial trees or send flowers to the family in memory of Robert Haataja, please visit our flower store.