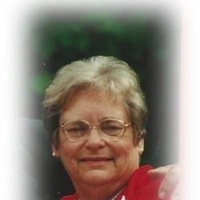 Patricia "Pat" Vernon of Naselle, Washington passed away December 20, 2013 at Providence St. Vincent Hospital in Portland, Oregon. She was 85 years old. Born Patricia Lou Gray on May 9, 1928 in Portland, Oregon to George and Marjorie Gray, Pat attended school at St. Francis Xavier Mission in Toledo, Washington and graduated high school in Castle Rock, Washington. She earned her Associates Degree in Business Management from Clatsop Community College and put her degree to use while working in the business office at the Naselle Youth Camp, retiring in 1992. Pat met her first husband, Melvin Aho, while living in Long Beach and was married on June 4, 1949. They lived in Naselle where they were parents of four children: Tim, Mindy, Randy and Mitch. Melvin and Mitch both preceded Pat in death, Melvin in August of 1976 and Mitch in October of 2008. Pat quickly became a part of the Naselle community, joining the Congregational Church where she led the Rhythm Choir off and on for 40 years and attended church service on Sundays for most of the years she was a church member. Pat was a member of Naselle High School booster club for 30 years. Pat's favorite hobby was sewing. For 60 years she was an active member of Martha's Circle at her church and for seven years she was a member of a quilting club with ladies from Rosburg where she enjoyed their many quilt shopping expeditions. Pat was an avid sports fan and rarely missed watching Seahawks and Mariners games. She was a 36 year member of Epsilon Sigma Alpha "ESA", a women's organization. She and her club members sponsored a charity golf tournament each summer in support of St. Judes Children's Hospital. Pat held several offices in ESA including chapter president and state president in 2002 and 2003. She was very active in ESA activities, often attending state and national conventions. Pat especially enjoyed spending time with her family. Pat is survived by her second husband George Vernon of Naselle; sister Joyce Bruner of Lacey, WA and step sister Linda Haynes of Springfield, OR; daughter Mindy Penttila of Warrenton, Oregon; sons Tim Aho of Dallas, OR and Randy Aho of Elma, WA; step children Mike Vernon of Snowmass, CO and Patty Cox of Vancouver, WA; six grandchildren, Rob Penttila of Vancouver, Tricia Mickle of Portland, Tanya Chadwick of Elma, Jason Aho of Elma, Alicia Cox of Seattle, Tia Rodriguez, Maija Saunders both of Monmouth, OR, Brianna Schweers-Aho of Vancouver, British Columbia; Step grandchildren Joshua of Santa Barbara, CA, Cinamon of Vista, CA, Camille of Olympia, Mendhy of Puyallup and Corey of Ridgefield, Kathy of Troy, Illinois and George IV of Gillespie, IL. There are also eleven great grandchildren and fifteen step great grandchildren. George had a son, George Vernon lll, who passed away earlier. A celebration of life with a reception following will be held on Saturday, January 4, 2014, 12 Noon at the Community Congregational Church in Naselle. Family graveside service will be held that morning at Peaceful Hill Cemetery in Naselle. Her guest book is available on-line at www.penttilaschapel.com. Donations can be made to Mitch Aho Baseball Fund, Naselle High School Booster Club or to the Congregational Church of Naselle in care of Penttila's Chapel, PO Box 417, Long Beach, WA 98631.
To order memorial trees or send flowers to the family in memory of Patricia G. Vernon, please visit our flower store.