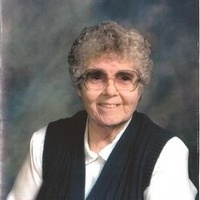 Edith Marie Bales passed away on June 22nd, 2013 exactly one month to the day after her 94th birthday, at her residence in Klipsan Beach. She was born to Frank and Hazel Martin in Grand Mound, WA on June 22, 1919, the third of 5 children. She moved with her family to the Long Beach Peninsula in 1921. She attended Irene Tinker's first grade in Long Beach. When she was in 2nd grade her future husband, Wally Bales was in 8th grade. She recounts that her early impressions of him were not favorable. When she was a sophomore in high school and went to the dances in the Redman Hall where everyone always participated in the Circle Two Step dance. This started with a circle of boys and a circle of girls marching in opposite directions. Edith's Uncle Bill Martin blew the whistle to signal the circles to stop and meet their partner. He always managed to pair up Wally and Edith. After a few dates, Wally proposed, and that was the start of a marriage that lasted 59 years ending with his death in 1995. There were a variety of activities in which Edith participated during her many years on the Peninsula. She was the PTA president and was a den mother for cub scouts along with her brother-in-law, Elmer Bales. She also started Little League with Eddie Bittner. Later she had a day care in her home, but her real love and talent was in crafts. She completed hundreds of tole paintings as well as beautiful candles and ceramics. She also started an altering and dressmaking business in her home. She conducted many adult education classes using these interests and the skills she developed. Edith is survived by four children and their spouses: Frank and Ingrid Bales of Long Beach and Yuma, AZ, Bob and Judy Bales of Emmett, Id and Yuma, AZ, Don and Louise Bales of Lebam, WA and Neva and Mel Mayer of Yelm, WA. She was preceded in death by son Willy Bales. She is also survived by nine grandchildren, twelve great grandchildren and four great great grandchildren. She was preceded in death by one grandson. She also is survived by numerous nieces and nephews. Funeral service will be held Monday, July 29, 2013, 11:00 AM at Ocean Beach Presbyerian Church in Seaview where she was a member. A reception follows. Concluding graveside rites will be at Ilwaco Cemetery. The casket will be open Friday, 10 AM until 4 PM at Penttila's Chapel by The Sea in Long Beach. Memorials are encouraged to either Fire District #1 or Harbors Home Health and Hospice in care of Penttila's Chapel by The Sea, PO Box 417, Long Beach, WA 98631.
To order memorial trees or send flowers to the family in memory of Edith M. Bales, please visit our flower store.