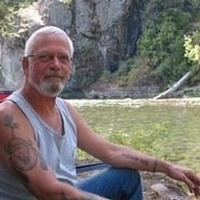 Michael L. "Mike" Frazier, 66, died June 17, 2013 at his Klipsan Beach, Washington residence, with his family at his side, of cancer. The son of Lindell and Dorothy (Pinkerman) Frazier, he was born April 16, 1947 in Merced, California. At an early age Mike moved to Zillah, Washington. There he lived with his grandparents, whom he called "mom and dad" as they raised him. They operated a peach orchard which contacted with Del Monte Fruit Co. Mike attended local schools. He held two associates degrees in police science; had taken classes in advanced crime scene investigation and F.B.I. homicide investigation; and was a certified police dog handler. Mike's early interest in law enforcement began when at age 23 he was the town marshal in Zillah. From there he became a Toppenish police officer, Yakima county sheriff's deputy, Long Beach (WA) police chief and worked at Jessie's Fish Co. in Ilwaco. He retired as a journeyman forklift operator from Silgan Container Corp. of Toppenish three years ago following 17 years of service. A year ago he fulfilled his dream of retiring to the coast which he dearly loved. Mike loved riding his motorcycle. He and his wife Laura took memorable trips along Hwy. 101 to the San Francisco Bay area; to Montana; and numerous day and weekend trips around the Northwest. He also enjoyed woodworking, beach combing, fishing, RVing, camping and drinking Coors Light. He was a "big time" animal lover who treated his companions as members of the family. Following two marriages he met Laura and the "third time" was the charm for both of them. They were married June 25, 2002 in South Lake Tahoe, CA and established their first home in Zillah. She survives residing at the family home in Klipsan Beach. Mike is also survived by his step-daughter Tara Gibbons of Kennewick, WA; sister Sandy Allenbaugh of Alexander, AR; mother-in-law Caroline Zeeb of Martinez, CA; several sisters and brother-in-laws; nieces, nephews and other members of his extended family. A memorial service celebrating his life will be held Saturday, June 29, 2013, 1:00 pm at Penttila's Chapel by The Sea in Long Beach with a reception following at the chapel. His family expresses their appreciation to Harbors Home Health and Hospice for their unwavering assistance by very skilled staff and caring volunteers. In lieu of flowers, donations to Harbors Home Health would be appreciated or the organization of one's choice. Mike's guestbook is available at www.penttilaschapel.com.
To order memorial trees or send flowers to the family in memory of Michael Lindell Frazier, please visit our flower store.