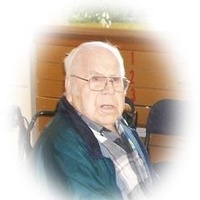 Ernest Richard Wirkkala, 96, of Rosburg died May 21, 2013, at his home in Seal River. Born April 15, 1917, in Astoria, Oregon, Ernest grew up in the Pacific Northwest, settling in western Wahkiakum County just in time to graduate from Naselle-Grays River Valley High School, class of 1935. Previous schools included Mount Baker High in Deming, Washington, and Clatskanie High School. His father and paternal grandfather were in the logging business, as was his uncle Oscar, the inventor of the choker hook and Ernie carried on the tradition, first as a rigging slinger, then as a faller, finally as a chain filer. After retirement from Crown Zellerbach in 1982, he continued to file chains in his spare time, as a private business, with many clients in Wahkiakum and Pacific counties. His lifelong work "in the woods" was interrupted only by his stint in the 354th "Pioneer Mustang Group" in World War II, in which he labored as a P-51 Mustang airplane mechanic and crew chief, rising to the level of staff sergeant. He married Selma Marian Koski in 1946, and they had five children, adding Selma's two youngest siblings into the home as well. A member of the Valley Bible Church, he was baptized in the Columbia River in 1972, fellow logger and church pastor Walter Forberg officiating. He served as secretary and president of the local chapter of the AFL-CIO during the 1960s and 1970s, and in retirement ran for and served as school board member. He had served previously as a Better Schools Club president, and was a lifelong member of the American Legion. Though named "Ernest," the reference to "earnest" was perhaps inapt: his favored form of humor was a sort of deadpan irony, to both the delight and consternation of family, friends, and bewildered acquaintances. He often referred to himself as "ERW" or simply "E"; a lifelong endurer of headaches, he once responded to a query about what the "E" on his cap stood for, he replied, "Excedrin." He is preceded in death by his parents, John Alexander Wirkkala and Hilma Sophia (Hansen) Wirkkala of Seal River; his brothers Charles of Naselle, William of Deep River, Walter of Seal River, Arthur of Naselle, and George of Carson, Washington; his sister Irene of Astoria, Oregon; his wife Selma, who died in 2003; his grandsons Daniel James Wirkkala and Jacob Andrew Loewen; and many other relatives and friends. He is survived by his brother, Edwin Wirkkala, of Rosburg, and by his children: Richard Wirkkala of Red Wing, Minnesota, and his wife Rebecca; Gail Heppner of Seal River, and her husband Richard; Rebecca Wirkkala of Wood Village, Oregon; Timothy Virkkala of Seal River; and Beth Ardueser of Clackamas County, Oregon, and her husband Todd. He is also survived by his grandchildren Amy Down, Nate Heppner, Naomi Stamoolis, Ann Wirkkala, Jeremiah Loewen, Natalie Heppner, Temeka Wirkkala and eight great grandchildren (with another on the way). Also surviving are his wife's one remaining brother, Ralph Koski, of Kalama, and youngest sister, Linda Reinkemeyer, of Troutdale, who lived with the family at both Deep River and Seal River homes. Interment services were held, after a viewing, Saturday morning, May 25, at Seal River Cemetery, arrangements by Penttila's Chapel by the Sea, and taps played on the English horn by Naomi Stamoolis. A memorial service was held at noon in Rosburg at Valley Bible Church, Rick Ballif, pastor. The hymns included "Be Still, My Soul," to the Finlandia hymn tune by Jean Sibelius, and Ernie Wirkkala's favorite, "Under His Wings"; Jeremiah Prasad Loewen played "A Little Prayer," composed for the occasion by Ernie's niece Andrea Reinkemeyer, on the piano; Naomi Stamoolis and Lydia Bouts provided accompaniment for the singing of the hymns. Rick Wirkkala read from the Bible, and James Gill read the obituary. A reception followed, filled with Ernie's family, friends, and neighbors.
To order memorial trees or send flowers to the family in memory of Ernie Wirkkala, please visit our flower store.