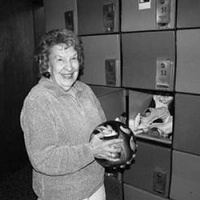 FRANCES O'NEIL Frances "Frannie" O'Neil, 86, a lifelong resident of the Peninsula, died May 17, 2013 in Chinook. The eldest child of William and Edith (Lundquist) Winn, she was born November 9, 1926 in Astoria. Soon after her birth the family moved to Nahcotta where she remembered playing near the Nahcotta docks. There she attended school until the building burned; finishing her elementary education in Ocean Park. Frances was a 1945 graduate of Ilwaco High School During high school and following graduation Frances worked at Red's Sandwich Shop (later known at The Siberrian) in downtown Long Beach and later at Marsh's Café where she never wrote down an order keeping everything in her memory. It was during this time that she and the late Cis Bittner traveled around the Northwest with the "world's largest frying pan" promoting the Peninsula and the Long Beach Clam Festival. On October 15, 1948 she married Wayne O'Neil whom she met while she was a member of the Rodeo Court. Wayne's father Jimmie was publisher of The Chinook Observer and for the ensuing years both worked side-by-side with Jimmie and Lee Marsh in publishing the paper. Frances was the proofreader and social editor among numerous other duties. Wayne and Frances took over sole operation of the paper in 1963, selling in 1984. The O'Neil's retained ownership of Midway Printery. During the 1960s Frances also worked as a checker at Sid's Market where she remembered the pranks that co-worker Ron Kaino often played on the customers. For many years Frances was active in Ocean Beach Rebekahs #313, serving in various capacities including as Noble Grand twice. A member of the Auxiliary of the Veterans of Foreign Wars, Frances also for many years answered the phone and was the "off hours" dispatcher for the Long Beach Volunteer Fire Department. In past years she was a Cub Scout leader and Sunday school teacher at Long Beach Presbyterian Church. Among her numerous community endeavors were volunteering for many, many years with the Kite Festival (where she headed up shirt sales with her trusty crew of fellow volunteers), Jazz Festival, Loyalty Day and Beach Run. She was an avid golfer; bowled for over 60 years including sponsorship of the Midway Printery team, hosted numerous bunco parties, and enjoyed trips to Reno where she always had a grand time. In her later years Frannie found great enjoyment from her great-grandchildren. Frances is survived by her son Dan of Ilwaco; daughter Peggy (Randy) Mathena of Colville, WA; grandchildren Josh O'Neil, Heather Varila, Carly (Michael Wahler) Mathena and Sarah (Matt) Miller; five great-grandchildren; sisters Roberta Werts of Olympia, WA and Lucille Gove of Yakima, WA; and brothers Bill Winn of Astoria and Chuck Winn of Long Beach. Her husband Wayne died in 1998. Funeral service will be held Friday, May 24, 2013, 11:00 AM at The Peninsula Church Center in Seaview. A reception follows in the Social Hall. Family graveside rites follow at Lone Fir Cemetery, Long Beach. Memorials may be made in her memory to the Lone Fir Cemetery Association in care of Penttila's Chapel, PO Box 417, Long Beach, WA 98631.
To order memorial trees or send flowers to the family in memory of Frances O'Neil, please visit our flower store.