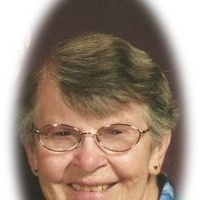 MARTHA HUTCINSON TALBOTT Martha Hutchinson Talbott, a 23 year resident of Surfside, Washington, died peacefully on the 1st of May 2013 in her home surrounded by family. She was born on the 24th of July 1925 in Lexington, Kentucky, the oldest daughter of Julian and Geneva Hutchinson's twelve children. Martha proudly graduated from Nazareth School of Nursing, Saint Joseph Hospital, Lexington, Kentucky in 1946. She was working as a registered nurse in the surgery department when she met and married George in 1950 in Lexington. Following their wedding they moved west to Walla Walla, Washington. This was the first of several moves she made with George and their seven children. That included homes in the states of Washington, Idaho and Colorado. Martha is survived by her husband George; daughters Jenifer Mundine, Thelma Talbott, Mary Patchen and Lisa Penzkover; sons Charlie, George and Patrick; twenty-two grandchildren and eleven-great-grandchildren. She also leaves behind her sister Blanche Horseman and brother Charles Hutchinson along with numerous nieces and nephews. Martha's services will begin on the 9th of May at 7:00 PM with a Rosary at Saint Mary's Catholic Church in Seaview, Washington. Her funeral mass will also be at Saint Mary's on the 10th of May at 11:00 AM. Martha's family will lay her to rest in the Oysterville Cemetery later that same day. In lieu of flowers Martha's family would like to suggest memorial gifts be made to Saint Vincent DePaul, one of many charitable organizations Martha worked with and supported. Her guestbook is available at www.penttilaschapel.com.
To order memorial trees or send flowers to the family in memory of Martha H. Talbott, please visit our flower store.