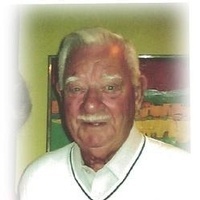 Kenneth V. Tetz Sr., 94, died March 29, 2013 in a local care facility. The son of William and Laura (Bottemiller) Tetz, he was born October 15, 1918 in Ridgefield, Washington. In 1934 Ken moved to Ilwaco with his parents. Entering Ilwaco High School as a junior he excelled in both football and basketball, graduating in 1936. Following high school Ken attended Washington State University for one year and was a member of Sigma Nu. Returning to the Peninsula he played basketball for the Chinook Packers basketball team. Ken served his country during World War II serving with the US Army. In 1958, Ken and his late brother Lawrence assumed ownership of their father's Union 76 oil distributorship. During Ken's ownership of Tetz Oil, he sponsored a bowling team, named Tetz Oilers. He later sold the business to his son Ken Jr. Ken enjoyed hunting, fishing and clamming which he learned from Cecil Timmen. Ken resided in Chinook, Washington for a number of years where he was a member of the Evangelical Lutheran Church for over 60 years. He was also a charter member of Long Beach Elks #1937 and the Ilwaco/Long Beach Kiwanis Club. Ken and Jeanne Lougheed were married January 25, 1941. She died in 2002. On March 18, 2005 he married Roberta Jo Glenn. She survives residing in Seaview, Washington. Also surviving are a daughter Dennise and husband Stan Fredrickson; son Doug Tetz and wife Shannon; daughter-in-law Dee Tetz; grandchildren Zach (Jessica) Tetz, Jessica Tetz, Barry Tetz, Craig (Jan) Fredrickson; brother Gary Tetz and wife Valerie; great-grandchildren Quentin and Peyton Tetz; step-children Tim (Marni) Williams, Marilyn Williams and Tom Williams. He was preceded in death by his son Kenny; wife Jeanne; and brother Lawrence. Memorial service will be Saturday, April 6, 2013, 1:30 PM at the Evangelical Lutheran Church of Chinook with a reception following. Graveside rites of Christian burial will be at Ilwaco Cemetery. Memorials are suggested to the Friends of Chinook School, PO Box 243, Chinook, WA 98614. His guestbook is available at www.penttilaschapel.com.
To order memorial trees or send flowers to the family in memory of Ken Tetz, Sr., please visit our flower store.