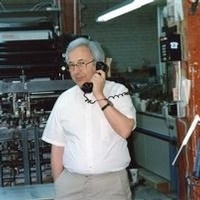 Steve Dimitri Gann passed away at Legacy Good Samaritan Hospital Friday morning, February, 15, 2013 after suffering a stroke. Steve was born April 17, 1927, in Portland to Jim and Anna Gann. Both of his parents were Greek immigrants and only spoke Greek with Steve at home. He learned English as a second language while playing with his friends. He attended Benson High School and The University of Oregon, graduating in 1949 with a BS degree in Business Administration with a minor in Foreign Trade. He was on the rally squad at the U of O and also in ROTC. In his senior year at Oregon he enlisted in the Army; served in the 2nd Infantry Division and he stayed in the reserves. He was called back during the Korean conflict and served another two years. During this time Steve accumulated enough through the G.I. Bill to enroll at Northwestern College of Law night school. He earned a Juris Doctor in Law and became a member of the Oregon State Bar in 1956. While he was attending Law School at night, Steve decided to open his own printing business -- Gann Publishing Company. Printing took up so much of Steve's time that he rarely practiced law. Steve was one of the last traditional printers from his era. The industry is radically different now than when he used to hand feed a printing press while working in his father's shop. While attending Benson Steve took a class on operating a Linotype linecasting machine. He was dismayed when he discovered that he knew more than the instructor who asked him to help teach the class. Steve hired several students from Benson through the years. In 2005 Steve was awarded the Benjamin Franklin Award from the Portland Graphic Arts Association in recognition of the contributions he made to the local printing industry. He proudly displayed the award in the office for all to see. There was rarely a day that Steve did not go into work, including the last week of his life. The presses have stopped for Steve but his sons will continue the family business as third generation printing craftsmen. Steve married Christine Haleston in October 1954. Christine passed away in May of 2011. He is survived by his three sons, Steven (Rayelle), Christopher, and Michael (Susan), grandchildren Jesse (Leanne), Steven, Michelle, Rhiana, and Nicole, and great-granddaughter Ava. Even though Steve graduated from Oregon, Christine graduated from Oregon State College (OSU). He did not object that his three sons Steven, Christopher and Michael all graduated from OSU. Steve would occasionally attend an OSU football game (wearing Duck attire) and would always let everyone know where he attended school. Steve did considerable volunteer work for various agencies including The Oregon Food Bank, Multnomah County Mental Health Advisory Board (chair), Cystic Fibrosis Association, Heart Association and Youth Progress Association. He was a member of the Royal Rosarians, the Greek Civic Club, East Portland Rotary, the Masonic Order, Scottish Rite, Shriners, the Multnomah Athletic Club, and helped found the Blue Back Submarine Council of the Navy League of the United States. He was instrumental in obtaining the Blue Back Submarine for OMSI. Steve ran for the Oregon State Senate in the early 80's and Steve and Christine would regularly attend the Dorchester Conference in Seaside. They loved traveling, and enjoyed many trips together throughout the U.S., Europe and Japan, as well as countless weekends at the family retreat in Welches. A private family burial service has been held. A celebration of life service honoring Steve will be held at 2:00 p.m. Saturday, March 16, at St. Andrews Presbyterian Church, 3228 SW Sunset Blvd. (at SW Dosch Road). The family suggests donations in Steve's name to St. Andrews Presbyterian Church Memorial Fund or the Good Samaritan Foundation in care of Penttila's Chapel, PO Box 417, Long Beach, WA 98631. -30-
To order memorial trees or send flowers to the family in memory of Steve Dimitri Gann, please visit our flower store.