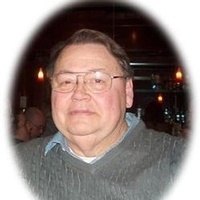 On December 18, 2012 John went home to be with the Lord. John was born on October 5, 1940 in San Francisco, California to John and Aileen Alves. He spent the early years of his life playing on the streets of San Francisco. His brother, Donald, joined the family while they still lived in California. In 1951 the family moved to Naselle, Washington. It was there that sister Lisa made the family complete. John attended school in Naselle and graduated from Naselle High School in 1958. During his high school years he worked for Appelo's Store and Wahkiakum West Telephone Company. He also met his wife, Carole Olsen. They were married for 53 years and had 4 daughters. He was a member of the Naselle Assembly of God Church. John and Carole made their first home in Compton, California were John worked for North American Aviation (Autonetics Division). They moved back to Naselle in 1960 and John returned to Wahkiakum West Telephone Company. He spent a total of 48 years with the company and retired in 2007 as Plant Superintendent. In addition to working at Wahkiakum West, John served 32 years with the Naselle Volunteer Fire Department. During that time he also served as an ambulance technician and trained as an EMT. In 1977 he was elected to the position of District Fire Commissioner and held that post until the present. He also spent several years as a member of the Board of Directors for the Naselle Water Company. Some of John's hobbies included hunting and fishing and he was an avid collector of many things. He loved taking pictures and was considered the family photographer. He was also the family Mr. Fix-It. There were very few things he wasn't willing to tackle and could always come up with creative ways to fix things that seemed unfixable. His family always looked forward to a Christmas feast of his famous Cioppino along with steamed Willapa Bay oysters. Or sharing a batch of his fresh salsa, watered down with tomato juice for the ones who could not take the heat as well as John could. His daughters knew they could always count on him for anything from how to fix a toilet, relationship or financial advice, or just how to be a good person. He loved traveling to Arizona with Carole in the colder months and also to Oregon to spend time with his daughters, sons-in-law, grandchildren and great-grandchildren. John was preceded in death by his mother Aileen, father John Sr, and brother Donald. He is survived by his wife Carole of Naselle and his daughters Sherry Fleming and husband Jeff, Kathy Graham and husband Scott, Julie Cash and husband Brian, and Jill Alves. Also surviving John are his grandchildren Christian, Courtney, Adam, Kassidy, Devon, and Ian, his great-grandsons Landon and Camdyn, and special extended family members Michael, Callie, and Kyle. His sister Lisa Bighill and husband Mike of Naselle, nephew Tracy, niece Adrienne, sister-in-law, Judeen Alves of Edmunds, nieces Nicole and Maija, 3 great-nieces, 1 great-nephew and many dear friends and extended family members. A memorial service for John took place on December 22, 2012 at Naselle Assembly of God Church. Committal will be at Peaceful Hill Cemetery at a later date. In lieu of flowers, contributions may be made to Naselle Assembly of God Church (New Building Fund) or the Naselle Fire Department. John's guestbook may be signed at www.penttilaschapel.com. Penttila's Chapel by The Sea in charge of arrangements.
To order memorial trees or send flowers to the family in memory of John Alves, Jr., please visit our flower store.