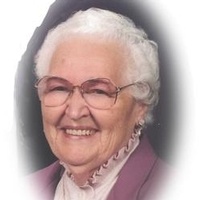 Rosburg, Washington resident Myrtle H. Anderson, 98, died November 12, 2012 in Raymond, Washington. The daughter of Herman and Sarah (Strausser) Oest, she was born April 7, 1914 in Napavine, Washington. The family moved to Cinebar, Washington where Myrtle attended grade school. She later lived with her sister in Napavine and graduated from Napavine High School in 1933. Myrtle was married to Manson Miller and they were parents of four sons. Manson died as a result of a hunting accident in 1947. In 1951 she married Norman Anderson and they made their home in Rosburg. Myrtle was actively involved in the Rosburg Community Club, Grays River Grange, VASA Lodge, Deep River American Legion Auxiliary Post #111, VFW Auxiliary Post #1825 and later transferred to Longview Auxiliary Post #1045. She was active in each of these organizations for over 50 years. Myrtle served as assistant cook at the Rosburg grade school for 17 years. Myrtle is survived by her husband of 61 years, Norman, of the family home in Rosburg; sons Bob (Thelma) Miller of Deep River, Jerry Miller of Naselle, and Don (Clarissa) Miller of Forks, WA; sister Lillian Brandeberry of Forks; daughter-in-law Prue Miller of Forks; 13 grandchildren; 25 great-grandchildren; 5 great-great grandchildren; plus several nieces and nephews. She was preceded in death by a son Ted Miller; granddaughter Linda (Miller) Stacey; her parents; and five siblings, Violet, Hilda, Cliff, George and Harry. Memorial service will be Saturday, November 24, 2012, 1:00 PM at the Grays River Methodist Church with a reception following at the Rosburg Hall. In lieu of flowers, memorials are requested to the Rosburg Community Club, PO Box 123, Rosburg, WA 98643. Her guestbook is available at www.penttilaschapel.com.
To order memorial trees or send flowers to the family in memory of Myrtle H. Anderson, please visit our flower store.