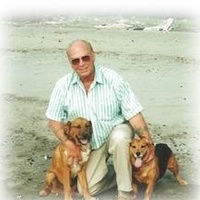 Rex Dreyer, 77, a 36 year resident of the Peninsula, died October 31, 2012 at his Seaview residence. The son of Harold and Blanche (Profitt) Dreyer, he was born in Tacoma, WA on April 11, 1935. He was raised and educated in Centralia, WA and served with the US Navy during the Korean Conflict. Rex met and married Lorraine Horrigan in 1956 and they were parents of two children. He worked in the copper mines in Arizona until moving to Longview, WA in July of 1957. There he worked in construction and eventually became owner of his own contracting business. Rex moved to the Peninsula in the spring of 1980 and was employed at Ocean Beach Hospital for a time. Rex was a member of many fraternal organizations including the American Legion, Eagles lodge, was a life member of the Elks lodge, and a past governor of Ocean Park Moose lodge. He enjoyed driving the beach, jazz music, and his many canine companions. Rex had a great sense of humor and was quick to share a joke. He married his companion of twenty-four years, Luci Tomberlin, in 1995. She survives, residing in Seaview. Also surviving are his brother Michael Madden and sister-in-law Jeanne; daughter Barbara and son-in-law Trig Pedersen; grandson Reg; granddaughter Megan; great-granddaughters Taliyah and Lilliana; step-daughters Lisa and Christy; closest friend Don Maxson; and many nieces and nephews. He was preceded in death by his parents, his sister Judy, and his son Reg. A celebration of his life will be held Sat., November 10, 2012, 2:00 PM at Long Beach Elks Lodge with a reception following. Memorials may be made to the South Pacific County Humane Society or Harbors Home Health and Hospice. His guestbook is available on-line at www.penttilaschapel.com.
To order memorial trees or send flowers to the family in memory of Rex Dreyer, please visit our flower store.