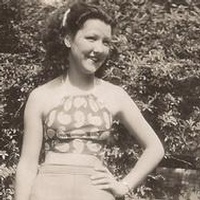 Ruth Jeanette Lentz Ruth J. Lentz, 90, died at her Ilwaco residence on October 26, 2012 with her family at her side. Ruth was born June 9, 1922 in Kansas City, Kansas, the daughter of Floyd and Nell Heagy. During the ensuing years of the Great Depression, Ruth moved with her family to Oregon. On August 10, 1939 she married Elmer Lentz. During their 61 year union, they were parents to six children; three of whom survive: Mark Lentz of Vancouver, WA, Becky Lease of Nehalem, OR, and Paul Lentz of Ilwaco. There are also 8 beloved grandchildren: Gary Lentz Jr., Thomas Lentz, Naomi Lentz, Christina Lentz, Emily Christensen, Sterling Singharaj, Niah Singharaj, and Kathleen Lentz. She was blessed with great-grandchildren Thomas Lentz Jr., Aimee Lentz, Scotty Wiley, Lilly Singharaj and Bella Lentz. Ruth was preceded in death by her two young sons Steve and Terry; and many years later Gary Lentz Sr. passed. Her husband of 61 years, Elmer, died in 2001. During her nearly 50 years of residency on the Peninsula Ruth was primarily at home being a wonderful homemaker. She remembered diligently working at Doupe' Brothers Hardware in Ilwaco and later she was the energetic and friendly middle-aged beauty serving the busy, filled rooms and tables at Red's Restaurant. Ruth was known and remembered for her limitless energy and love for her family and also her "second family" as they helped in raising four grandchildren from their tender young years. She was the true, strong, yet gentle matriarch. Her eyes were on her household at all times. To those in need, her hand was always open to help in any way she could. In her calm wisdom, she always perceived the best in everyone. Many who knew her and respected her affectionately called her "gramma". She was also known for making the world's best pies and for many years enjoyed sharing her homemade treasures. Although Ruth endured many hardships and losses during the course of her life she always maintained a positive outlook. Her strength was fortified by her strong faith and hope for the future. Through her years of diligent study she learned of the Bible's promise of the time when the earth will be transformed into a peaceful paradise, where the earth's inhabitants will be restored to youthful health and vigor. She also loved to share her knowledge of the resurrection where countless loved ones will be brought back to be reunited with their families. Her heart would glow with warmth when she shared her strong hope for the future based on Biblical promise. On behalf of Ruth, her family and friends, we would like to extend a warm welcome to you for the Memorial for Ruth to be held Sat., November 10, 2012, 2:00 PM at Kingdom Hall of Jehovah's Witnesses, 10710 Pacific Way N., Long Beach. Private burial has been held at Lone Fir Cemetery, Long Beach. Her guestbook is available at www.penttilaschapel.com.
To order memorial trees or send flowers to the family in memory of Ruth Jeanette Lentz, please visit our flower store.