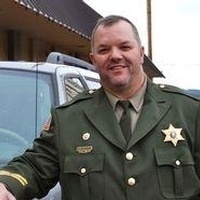 Jon was born in Little Rock, Arkansas and raised in Mountain Home, Arkansas, where he still has numerous family members who remember and love him. At the time of his death, he was 50 years old and living in Grays River, Washington. He had lived in Arkansas, Maryland and California, but when he met his wife Lori and fell in love, he moved to Washington and never looked back. From a very early age he wanted to be in law enforcement. Jon graduated from Clayton Valley High School in Concord, California and subsequently worked for several banks before entering the police academy and making law enforcement his life's work. He has received numerous awards and citations during his law enforcement career. Jon lived his life to serve others. He was fearless in his devotion to his family and his work. The day he graduated from the police academy was one of the happiest days of his life. Everyone who met Jon was awed by his larger-than-life appearance and overwhelming generosity of spirit. He liked to tell the story that when he pulled over someone for speeding, he might let them off if they could spell the county they were in - "Wah-KIA-kum"! Jon was a passionate motorcycle enthusiast who enjoyed riding his Police Officer Special Edition Harley Davidson. He also loved riding ATVs both recreationally and during marijuana-eradication missions. He was happy serving his community, patrolling the county roads or making presentations to local groups. He accomplished his dream of becoming sheriff and was known for always having an open-door policy and listening ear. Jon was committed to being a Christ-follower. He strove to live out his faith and respected everyone he met. He was always willing and able to help those in need. He was a man who loved music, animals and especially his family. Being married to his wife Lori and having his daughter Kaelee were the proudest accomplishments of his life. He was a loving, dedicated and doting husband and father. His daughter boasted that he was not only her hero but her best friend. His wife always referred to him as the love of her life. Jon was preceded in death by his parents Tom and Reba Dearmore and his much-loved drug dog Digger. He is survived by his wife Lori and daughter Kaelee of Grays River, Washington, honorary daughter Haley Landis of Las Vegas, Nevada, sister Diana of Woodland, California, in-laws Paul and Darlene Bjornsgard of Naselle, brothers and sisters in-law Jeff and Katie Bjornsgard of Naselle, Ryan and Cherise Bjornsgard of Camas, Chris and Alissa Dorman of Naselle, nieces and nephews Emily, Paul, Wesley, Ava, Lauren, Jadon, Adriana Bjornsgard and Cole Dorman, and numerous cousins in Arkansas and Louisiana and Missouri. Memorial service was held at New Life Fellowship in Longview on Saturday, October 27th with Pastor Richard Cary of Naselle Assembly of God officiating. A reception hosted by Behind the Badge Foundation followed. Donations may be made to the Jon Dearmore Memorial Fund at any Bank of America or the charity of your choice. He will be remembered for the way he lived his life. Jon's guestbook may be signed at www.penttilaschapel.com. Penttila's Chapel By the Sea in charge of arrangements.
To order memorial trees or send flowers to the family in memory of Jon Dearmore, please visit our flower store.