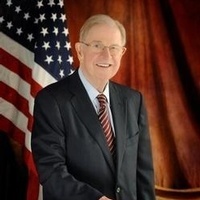 Sidney R. (Sid) Snyder, age 86, passed away on October 14, 2012 at his home in Long Beach. He was born in Kelso, Washington on July 30, 1926 to Adahlena Beeman Snyder and Edwin Alfonso Snyder and was the youngest of four sons. He was a graduate of Kelso High School, served briefly in the Army Air Corps during World War II and attended Lower Columbia College. Sid moved to Long Beach in 1946, and in 1953 he bought a small grocery store in Seaview with 100% borrowed money. In 1957 he built a larger store one block north, and he operated Sid's Market for nearly 55 years. In 2008 he sold the store to his son, Sid,Jr., and he was thrilled the store would continue to be locally owned and stay in the family. In 1949 he was hired as an elevator operator at the legislature in Olympia, starting a soaring career that could only go up. He soon became Bill Room Supervisor and spent 12 years as Assistant Chief Clerk of the House of Representatives and 19 years as Secretary of the Senate. Sid was elected to the Senate in 1990 and was selected by his colleagues to serve as Caucus Chair as a freshman. He later became Majority Leader. He served his constituents proudly and his first priority was always to the legislature as an institution. His faith in the legislative process, parliamentary rules and protection of the rights of the minority was strong enough to raise principle over pragmatism. Sid was awarded many honors during his long legislative career. In 2002 he was awarded the Excellence in State Legislative Leadership Award by the National Conference of State Legislatures and the Council of State Governments. He was chosen from a field of more than 30 nominees from across the country for this honor. Sid was a founding member of the Bank of the Pacific established on the Long Beach Peninsula in 1971, and he served as Chairman of the Board for 25 years. He was a charter member of the Long Beach Lions Club and served on the boards of many businesses and organizations. He is survived by his wife of 61 years, Bette Kennedy Snyder of Long Beach; son Sid Snyder, Jr. (Robin Powell) of Gearhart, OR; daughters Karen Snyder (Bob Hamilton) of Long Beach and Sally Paxton (Ray) of Bellevue, WA; and grandchildren Melissa Johnson, Calvin Snyder (Selam Gebrekidan), Whitney Snyder and Cole Paxton. Services will be held Saturday, October 20, 2012 at 11:00 a.m. at the Carl P. Aase Gymnasium at Ilwaco High School, Black Lake Campus, 404 School Road, Ilwaco. Parking at Port of Ilwaco with shuttle bus to the school will be provided. A reception follows at the school. Burial will be at Fern Hill Cemetery, Menlo, Washington. Remembrances can be made to Ocean Beach Education Foundation, P.O. Box 1377, Long Beach, WA 98631 or The Templin Foundation, c/o Jim Finlay, P.O. Box 755, Long Beach, WA 98631. His guestbook is available at www.penttilaschapel.com.
To order memorial trees or send flowers to the family in memory of Sid Snyder, please visit our flower store.