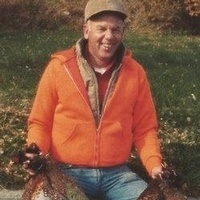 Lifelong Ilwaco resident Maurice "Moe" Graham, 84, died August 6, 2012 in Astoria. The son of Oliver and Tunie Graham, he was born in Astoria on June 24, 1928. One of Moe's favorite and often told stories concerned his birth. As his mother's due date approached, his father, who was a gill netter, took her to Astoria by boat which at the time was the only way to get there. Leaving her at the dock, he returned a week later to take mother and son back to Ilwaco. Moe graduated from Ilwaco High School in 1947 and enlisted in the US Army on January 12, 1951. He was honorably discharged in 1956. A fourth generation commercial fisherman, Moe began fishing at age 11 with his uncle "Dutch" following the death of his father. One of his proudest moments was when he purchased the FV "Virgo". Another of his stories concerned his father of whom he was very proud. Some fishermen were in trouble at Cape "D" and needed to be rescued from the churning waters. Moe's father and uncle Dutch went to the Coast Guard station and said "go get those guys". They were informed that wasn't possible because there were no crew members available. "You've got a crew now" was the reply from Moe's dad and they loaded up the boat and took off to rescue the fishermen. Rescue them they did after being out all night, towing the vessel across the bar the following morning. Moe was a charter member of the Long Beach Elks, a past member of the Masonic lodge and an avid supporter of Ilwaco High School athletics. He will be remembered by his family and many friends for his sense of humor and his intriguing, interesting and fascinating stories of past days. Survivors include family members Bob Graham of North Bend, OR, Dennis Graham of Kelso, WA, Gary Graham of Bellevue, WA, Doug Graham of North bend, OR, Cliff Graham of Clarkston, WA and Nancy Holms of Long Beach; friend Kim Hamilton of Warrenton, OR; and his longtime best buddy Jack Ford of Long Beach. He was preceded in death by his parents and sister Shirley Mae Graham. Moe requested that no service be held. An account has been established in Moe's name at Bank of The Pacific for memorial contributions to support the Ilwaco Food Bank and also to place a bench in his memory at the Port of Ilwaco. His guestbook is available at www.penttilaschapel.com.
To order memorial trees or send flowers to the family in memory of Maurice R. Graham, please visit our flower store.