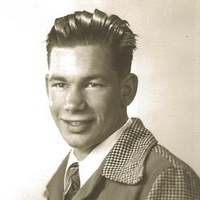 Lewis D. Byrd, 84, died June 11, 2012 in Bellingham, WA, where he had resided the past 35 years. He led a long and full life. Lewis was born April 18, 1928 in Newport, OR, in a float house on Yaquina Bay. He was the eldest of six children born to Clarence and Mary Lucille (Harris) Byrd. In his teenage years, Lewis helped operate the family dairy farm in Menlo, WA, developing a strong work ethic. He was a great storyteller, giving detailed accounts of his childhood. A favorite story was about "Cubby" the family pet bear. His father rescued the orphan bear and brought him home in his lunch pail. "Cubby" lived with the family for 3 years before returning to the wild. Lewis graduated from Valley High in Menlo, in 1947. He joined the Army, assigned to the 82nd Airborne. Lewis transferred to the Division of Construction Engineers to build Fort Richardson in Alaska. While on furlough he married his sweetheart, Lois Torppa of Naselle, WA. They enjoyed 61 years of marriage! After an honorable discharge they settled in Naselle near to friends and family. He worked as a carpenter on the Naselle school complex. He then went to work at the Naselle Air Force Base Radar, where he enjoyed the complexity of the job. This prepared Lewis for a career in aviation. He began as a flight coordinator at a small airport in the village of Tanana, AK, for the FAA. He was then transferred to Fairbanks, AK where he worked as an air traffic controller for 9 years. In 1966 Lewis transferred to Palmdale, CA, where he helped control the airspace to and from the L.A. International Airport. While in Palmdale Lewis served as an Elder in the Presbyterian Church. All five Byrd daughters graduated from Palmdale High and began their college studies. In 1976 Lewis returned to the Pacific Northwest to work at the Bellingham Flight Service Station. He retired in 1988 after 37 years of service with the Federal Government. During his 35 years in Bellingham he was a faithful member of the Birchwood Presbyterian Church. Lewis was a man of many and varied interests, including woodworking, stained glass projects, stamp collecting, organic gardening, science, nature, and all forms of mathematics. He was a member of the Northwest Mushroomers Assoc. and spent many hours collecting and identifying mushrooms of the Northwest. Lewis had a keen interest in his family genealogy, which has been traced to the Revolutionary War as well as Pioneers of Washington State. Lewis is survived by his wife, Lois Torppa Byrd, and four daughters: Linda Seaton (Michael) of Hanford, CA, Laura Byrd of Bellingham, WA, Liisa Lyon and Lucia La Rocca (Frank), both of Oakland, CA. He is also survived by brothers Dickie Byrd of Fairbanks, AK and Gary Byrd of Poulsbo, WA; plus three grandchildren and eight great-grandchildren. Lewis was preceded in death by his eldest daughter, Loretta Byrd, his brother, Gene, and sisters, Mary Lou Revely and Betty Lee Graham. Funeral service were held Saturday, June 16, 2012, 11:00 AM at the Community Congregational Church in Naselle. Concluding graveside rites followed at Peaceful Hill Cemetery with a reception at the church. Memorials are encouraged to the Alzheimer's Association of Washington 100 W Harrison Street, N200, Seattle, WA 98119 or to the Peaceful Hill Cemetery Association, PO Box 501, Naselle, Washington 98638. His guestbook is available at www.penttilaschapel.com.
To order memorial trees or send flowers to the family in memory of Lewis Daniel Byrd, please visit our flower store.