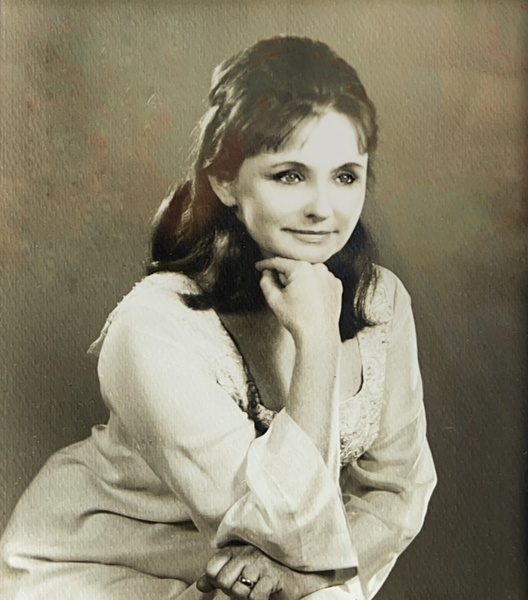 Mrs. Poulshock was born December 5, 1926 in Los Angeles, the elder sister of Donna Baker, and the daughter of Warren and Lillian Baker.

In 1946, Barbara left her native Los Angeles, and she boarded the S.S. Matsonia headed for Honolulu. Her father Warren wanted Barbara to expand her horizons, so he sent her to paradise to live with friends and search for new adventures.

The S.S. Matsonia set off as the first passenger ship to sail for Hawaii after the war. And as the vessel approached port in July 1946, Barbara gazed in awe as locals greeted the ship waving mirrors that sparkled and glistened like diamonds in the bright tropical sun.

Barbara gave piano lessons around Honolulu and became associated with the Honolulu Opera Company. Then one day she received a message from a jazz band of moonlighting Navy musicians. They needed a singer for an upcoming gig at an officer’s club. At their first rehearsal, she met Normand Poulshock — the piano player in the band.

The two fell into a groove of love and music. They were married at Saint Andrew’s Episcopal Church in Honolulu, and Barbara and Normand enjoyed 55 years of marital bliss until Normand died on July 5, 2003. Normand and Barbara loved each other as if they were “the only two on earth.” But they shared their lives as gifted and gracious musicians, composers, and teachers with hundreds and hundreds of their friends and students in Honolulu, Los Angeles, Klamath Falls, Edmonds, Bellevue, Tacoma, and the Long Beach Peninsula.

A consummate performer, Barbara performed in musicals, operas, and sang classical songs accompanied by full orchestras. After hearing one performance, the Director of the Music Department at Pacific Lutheran University (PLU) approached Barbara and offered her work in the early 1970’s as a voice coach.

While teaching at Pacific Lutheran in Tacoma, Barbara also earned her Bachelor of Music there in 1977, and she worked at PLU full time as an Instructor of Music until 1994. In her twenty some years at PLU, Barbara taught vocal literature and pedagogy. She produced full operas and musicals in her “Opera Workshop” class, and she taught hundreds of individual vocalists, many of whom became highly accomplished singers in their own right.

After leaving PLU, Barbara moved with Normand to Ocean Park Washington where they continued their life of musical performing and teaching. While retired, her musical energy flourished, as she published numerous vocal and choral arrangements with Pavane Publishing. Though Barbara felt profound loss at the death of her husband in 2003, she found much comfort, camaraderie, and delight with her beloved community of collaborators and friends on the Long Beach Peninsula.

She directed the choirs at Ocean Park Methodist Church and Ocean Park Lutheran Church, enjoying gracious love and support from both these congregations. She also directed numerous musicals with the Peninsula Association of Performing Artists (PAPA) as well as choral performances with the Bayside Singers.

Barbara loved good food, and she could sit down at a meal she had cooked, take a bite, close her eyes and say, “Wow! I’m a good cook!” She was perpetually dazzled by music. You might wake up and find her at 2AM, playing her piano while transfixed by Rachmaninov or Mozart. Barbara loved good humor, and she always welcomed a good joke with a hearty laugh, knowing not to take life too seriously because she knew she would not get out of it alive anyway.

A memorial and celebration of Barbara’s life will be held at Ocean Park United Methodist Church on Thursday August 18th at 10:00 AM, 2022 with a reception following.

A family graveside burial service was held at Oysterville Cemetery.

To order memorial trees or send flowers to the family in memory of Barbara Poulshock, please visit our flower store.