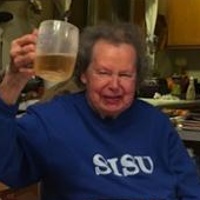 A native daughter of Rosburg, Bernice E. Rinell, 91, died in Bremerton, Washington on June 2, 2019. The daughter of Finnish immigrants Waino and Laina (Takala) Rinell, she was born at home on September 21, 1927. She grew up on the family farm in Rosburg where she attended Maple Grove elementary, and then after moving to Aberdeen graduated from Weatherwax High School.

Bernice was married to George Koski and later Jack Dykes. She was a devoted mother and homemaker when living locally. Later she resided in Ballard near Seattle where she worked in the accounting department of Pay 'N Save Corp. before retirement when she moved to Poulsbo to be near her daughter Dee Dee.

Bernice loved entering contests and drawings, playing table games, and cards. She had traveled throughout the US, to Alaska, Hawaii, and Mexico and especially enjoyed her three trips to her roots in Finland where she met family. Bernice also collected rocks (heart shaped ones) and tended to her garden, always trying to grow an award winning pumpkin though she did manage an 18” sunflower!

Bernice always considered the Naselle/Rosburg area home. Appropriately she will be buried with a graveside service at Salmon Creek Cemetery in Naselle at 1:00 PM on Wednesday, June 12th. Her guestbook is available at www.penttilaschapel.com.

To order memorial trees or send flowers to the family in memory of Bernice Elizabeth Rinell, please visit our flower store.