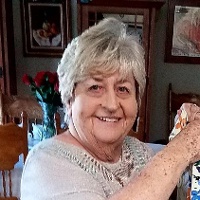 Beverly Elaine Jernstrom was born on Dec.31, 1936 in Chinook, WA and  passed away on Aug 21, 2019 in Portland, OR. She was the third of four daughters born to Ted E. and Lenore M (Nelson) Lundeen. She attended Chinook Elementary School, was a graduate of Ilwaco High School, attended Lewis and Clark College for 3 years in Portland, and graduated from Linfield College with her Bachelor of Science degree after a 30 yr hiatus from college.

She married “JP” Pete Smith in 1958 and they enjoyed travelling while he was stationed with the US Air Force in Hawaii, California, France, and England. Their family grew as they welcomed their daughter Greta in California and their daughter Kimberly in France. In England they volunteered with other Air Force families at the Palace School for Handicapped Children. They settled in Ilwaco   and  later divorced in 1973.  After many years of being single, Beverly married the love of her life, Kenny Jernstrom in 2013 and was the happiest she had ever been with him.  She considered his children, grandchildren, and great-grandchildren to be her own and delighted in their visits & phone calls.

Beverly was known for her laughter and smile and enjoyed family gatherings, playing the piano, travelling, keeping in touch with relatives in Sweden, reading, her pets, shopping, oil and tole painting, local history through storytelling, baking, and watching & identifying the birds that would gather at her bird feeders and birdhouses around her yard.  She delighted in the natural beauty of Pacific county and had participated in gardening, razor clam digging, fishing, boat rides, beach combing, picnics on the beach, watching sunsets over the ocean, and blackberry picking and pie making. Some of her most treasured memories from childhood were the slumber parties held on the beach in Chinook along the Columbia River with her friends.  She would recall adventures including story telling & singing around the bonfire and giggling into the night. She enjoyed those friendships throughout her life.

Bev worked various jobs during her life  beginning at Chinook  cannery; Anchorage Charters; the store at Ft Canby State Park, at the Chinook Observer(where she was a clerk & wrote the local family gossip/news column “Chatter”); taught Adult Basic Education Classes for Grays Harbor College; was an  Activities Director & physical therapy assistant @ Ocean view Convalescent  Center, and had been an  on-call worker for Child Protective Services.  There were times that she worked 3 jobs at a time to provide for her daughters. She later found her calling as the Director of In-Home Care services for PACE for Pacific County where she eventually retired after 20 yrs.  She was a lifetime member and former Sunday school teacher and council member of the Evangelical Lutheran Church of Chinook.  She was an active member of the social club Modern Travellers and was a former member of Rebekahs and AAUW.

A Celebration of Life service will be held Friday, August 30th at 1:00 PM at the Evangelical Lutheran Church in Chinook, WA. In lieu of flowers the family requests donations in memory of Beverly to the South Pacific County Humane Society in Long Beach.

Her guestbook is available at www.penttilaschapel.com

To order memorial trees or send flowers to the family in memory of Beverly Elaine Jernstrom, please visit our flower store.