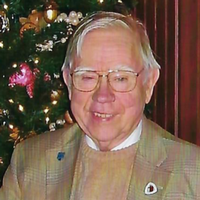 Carlton Appelo born on a fishing boat to Astoria, Ore. from Deep River, Wash. on May 12, 1922, lived in Deep River and Rosburg for 96 years and died Feb. 12, 2019, in Astoria. Nao,selle High’s 1939 student body president, he helped run the Students’ Coop (a kind of fraternity system for, and owned by, students from small towns) at the University of Washington, earning a BA in 1943. He served as a Captain on Okinawa, where he survived a fusillade of incandescent tracer bullets he never forgot, and he helped young soldiers under his command pen letters to mend broken romances. He earned an MBA from the UW in 1948, did graduate work at the University Stockholm, then became merchandise manager of Appelo Shopping Centers in 1950.

Carlton was best known as a regional and state historian, earning the 1996 Governor’s Heritage Award. His gift for collecting photos and historical items, interviewing historical families, and telling stories are well known and well documented. His collections and photos are available to the public at the Appelo Archives Center in Naselle.

Carlton was a man who saw community support as a way of life. He joined the Grays River Grange in 1950 and the American Legion in 1944. He helped to found Port District #2 and Vista Park in Skamokawa, Wash., and co-founded the National Resource Conservation District, serving on their board for many years. Carlton and his beloved wife Berenice were active in the Congregational Church in Naselle for many decades.

Carlton and Berenice were married on Easter Sunday, 1955 in Oakland, CA, and made Deep River their home. She died on November 10, 2004, after many wonderful years with Carlton, with whom she toured America and the world. They laughed for years about their walk in a Moscow cold snap when they bought all the Russian newspapers, they could to stuff into their clothing and get one degree warmer. It always felt warmer when they returned home to what they called the Retreat.

A memorial service will be held Sat. March 2 at 1:00 pm at the Valley Bible Church, Rosburg, Washington. Memorial gifts can be given to the Appelo Archives Center at 1056 SR4, Naselle, WA 98643. His guest book is available at www.penttilaschapel.com.

To order memorial trees or send flowers to the family in memory of Carlton Appelo, please visit our flower store.